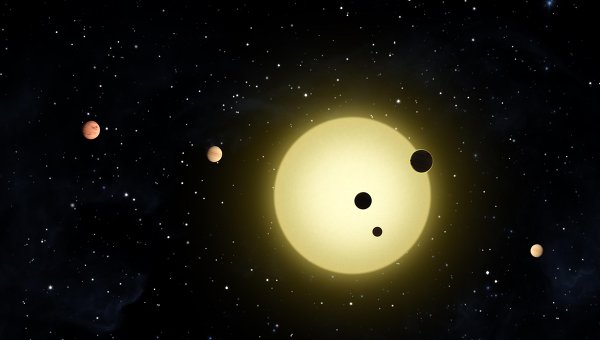 Planetary scientists found that the newly discovered planetary system Kepler-80 is an unusual “matryoshka” – the rotation four out of five of the planets are synchronized in such a way that they are arranged in the same figure every 27 days, according to a paper published in the Astronomical Journal.

The system Kepler-80 was opened on the orbital telescope “Kepler” in 2012. It is located in the constellation Cygnus, at a distance of 1.1 a thousand light-years from Earth. Home to five planets orbiting a relatively young star Kepler-80 very closely – distance from the furthest planet to the star is smaller than the distance between the Earth and the Sun 10 times.

This fact, as explained by Mary McDonald (Mariah McDonald) and Darin Ragozin (Darin Ragozzine) from Florida Institute of Technology (USA), makes Kepler-80’s most “overpopulated” planetary system from those known to astronomers to date. The close proximity of the planets, according to scientists, it is interesting from the point of view of the stability of their orbits, and how their interaction affects their rotation.

MacDonald and Rogozin tried to understand how planets Kepler-80 manages to maintain stability, watching as the passages of each of them reduced the brightness of the star. Since the planet has made one revolution around the star in very short time – from one to ten days – the planetary scientists were able to quickly amass enough data to calculate the mass of the planets and the disclosure of the nature of their movement along the orbit.

Such an organization of planets orbiting in a “doll” with the best from each other by parts leads to the fact that every 27 days planet system Kepler-80 are arranged in the same figure, forming relatively rare in the Solar system “parades” of the four planets.

Such an orbital connection, according to scientists, hold that the planetary system from disintegration and collisions between planets, each of which is heavier than Earth 6 times and is considerably greater than its diameter, and while they are all located on a piece of space that is approximately three times less than the average radius of mercury’s orbit.

How did this system? While astronomers have no definitive answers to this question, but they suggest that these planets born in the outer reaches of the system and migrated to Kepler-80 after they have been combined in the orbital a “doll”. Her study, as I hope MacDonald and Ragozin, will help to understand how there are such overcrowded system and as far as they are suitable for the origin of life.