In the craters on the moon get struck by lightning 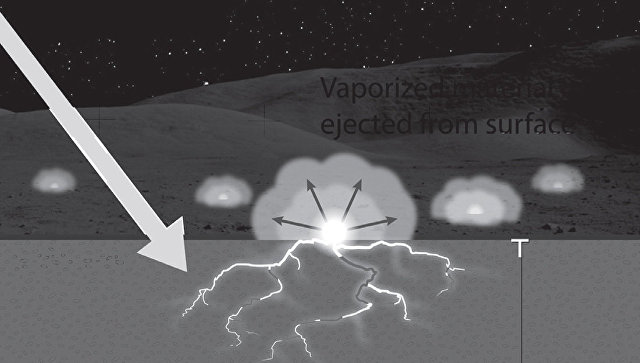 The surface of the moon changing not only as a result of bombardment by meteorites, and lightning strikes, which were found in the coldest and darkest craters probe LRO.

The surface of the moon is covered with huge craters, which appeared in the fall of large asteroids 4 billion years ago. Scientists began to carefully study lunar craters after the Indian spacecraft with the Russian LEND instrument found ice in the darkest craters on the moon.

Exploring strange data that was transmitted to Earth space probe LRO, scientists have noticed an unusual energy bursts that have arisen during passage of the apparatus over the dark craters which were previously discovered large reserves of water.

Scientists have documented the accumulation of charged particles and an unusually high temperature in the soil craters. Scientists concluded that lunar soil – regolith that does not conduct current, and due to this, charged particles of the solar wind, penetrated into it, do not lose their charge with time, the strength of the electric field generated by these particles is gradually increasing, which leads to the formation of lightning and powerful electric discharges.

Lightning occur inside the dark craters with significant water reserves where a conductor of electrical discharges serve as water vapor generated inside lunar soil. The zippers have a very unusual nature – they are not born on the soil surface and within it, at a depth of about a millimeter from the surface and their birth leads to significant geological changes – level electricity intensively vaporize regolith and stirred it.

According to scientists, the lunar lightning play a big role in changing the appearance of the moon. This role is much more significant that role falling to the moon asteroids and meteorites. According to specialists, the lightning vaporize and destroys about 7,000 tons of regolith every year.