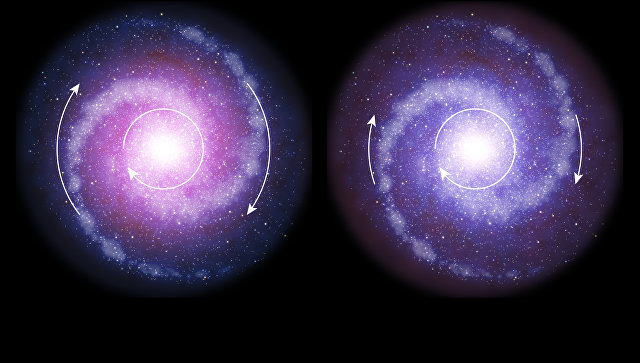 Dark matter was almost absent in the first galaxies of the universe that arose after the Big Bang, or it behaved differently from their modern “sisters,” astronomers state in an article published in the journal Nature.

“Surprisingly, the speed of rotation of stars and gas in these galaxies is not the same for their margins and center – it decreases as they move toward their periphery, which means that either conventional and not dark matter dominates them, or the gas flows in them Were much more active and turbulent than in their modern “cousins,” said Reinhard Genzel of the Institute for Extraterrestrial Physics of the Max Planck Society in Garching, Germany.

For a long time, scientists believed that the universe consists of the matter that we see and which is the basis of all stars, black holes, nebulae, accumulations of dust and planets. But the first observations of the speed of the stars in nearby galaxies in the 70s of the last century showed that the luminaries on their outskirts move at them with an impossibly high velocity, which was about 10 times higher than the calculations based on the masses of all the stars in them .

The reason for this, as scientists believe today, is the so-called dark matter – a mysterious substance, which accounts for about 75% of the mass of matter in the universe. As a rule, in each galaxy there are about 8-10 times more dark matter than its visible “cousins”, and this dark matter keeps the stars in place and does not allow them to “run away”.

Observations of the distribution of dark matter on the closest and far from us corners of the universe, conducted with the help of terrestrial telescopes and the “Planck” probe, pointed out that dark matter could have other properties in the past. Moreover, astronomers from MIPT recently suggested that the decay of particles of dark matter could influence how the universe expanded in the last few billion years.

Hentzel and his colleagues discovered another oddity in how dark matter was distributed and how it behaved in the distant past, watching the distant galaxies that emerged only 3 billion years after the Big Bang, using the VLT telescope at the high altitude observatory Paranal in Chile .

In total, the team of Henzel managed to find six large and bright galaxies comparable in mass with our Galaxy, and measure the rotation speed of stars in them by how much the lines of hydrogen and some other elements in their spectrum are “stretched” and “compressed”.

Scientists expected a surprise – instead of the equal speed of the stars on the outskirts and in the centers of the galaxies, they saw that the luminaries that were on the outskirts of these six ancient “star metropolises” moved much slower than the stars in their nucleus. As Hentsel explains, this means that there is much less dark matter in them than in modern galaxies.

Moreover, further observations and theoretical calculations have shown that in the central part of these galaxies there is actually no dark matter, or it contains a very small amount. This discovery, on the one hand, fits into other observations of the early universe, but, on the other hand, it indicates that galaxies were formed earlier than dark matter accumulated in them, which does not fully correspond to current concepts of its behavior and distribution.

On the other hand, scientists acknowledge that such a lack of dark matter in galaxies could simply be a local anomaly in the distribution of this mysterious substance, or “ordinary” matter could accumulate in the nuclei of galaxies under the influence of other clumps of dark matter that “pushed” gas from the periphery of the first Galaxies of the universe in their central regions. In any case, to check all these theories, it is necessary to find not six, but hundreds of such strange galaxies, scientists conclude.