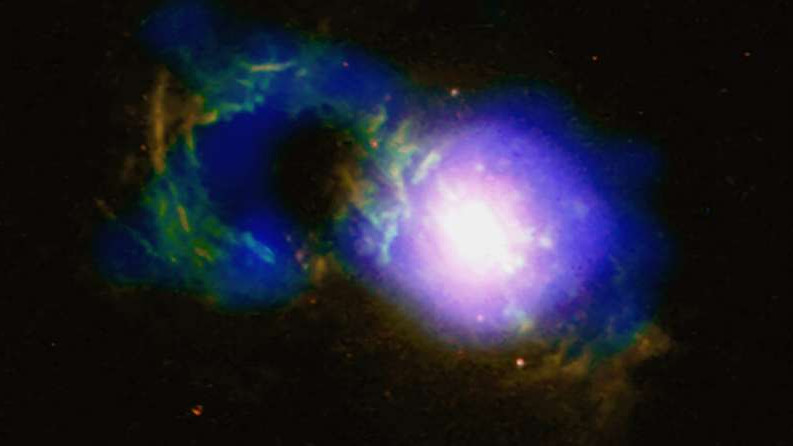 The source of the space squall was a supermassive black hole buried in the center of the galaxy, officially known as SDSS 1430 + 1339. When matter in the central regions of the galaxy is attracted to a black hole, it is charged with strong gravity and magnetic fields near the black hole. The falling material produces more radiation than all the stars in the host galaxy. This kind of actively growing black hole is known as a quasar.

Located about 1.1 billion light-years from Earth, Teacup was first discovered on visible-light images by civilian scientists in 2007 as part of the Galaxy Zoo project, using data from Sloan Digital Sky Survey. Since then, professional astronomers have used space telescopes to gather clues about the history of this galaxy in order to predict how stormy it will become in the future. This new composite image contains X-ray data from Chandra (blue) and an optical view from NASA’s Hubble space telescope (red and green).

The “handle” of a cup is a ring of optical and X-ray light surrounding a giant bubble. This pen-shaped feature, which is about 30,000 light-years from a supermassive black hole, was most likely formed by one or more eruptions of a black hole. The radio emission — shown in a separate composite image with optical data — also outlines this bubble and the second bubble of about the same size on the other side of the black hole.

Earlier observations using an optical telescope showed that the atoms in the Teacup knob were ionized, that is, these particles became charged when part of their electrons were separated due to strong quasar radiation in the past. The amount of radiation required for ionization of atoms was compared with the amount obtained from optical observations of a quasar. This comparison showed that quasar radiation decreased by approximately 50–600 times in the last 40–100 thousand years. This sharp decline has led researchers to conclude that the quasar in Teacup is fading.

New data from Chandra and the ESA XMM-Newton mission gives astronomers a better understanding of the history of this galactic storm. X-ray spectra show that the quasar is strongly shaded by gas. This means that a quasar produces much more ionizing radiation than indicated in estimates based only on optical data, and that rumors of a quasar’s death could be exaggerated. Instead, the quasar has decreased by a factor of 25 or less over the past 100,000 years.

Chandra data also shows the presence of a hotter gas inside the bubble, which may mean that the wind is blowing out of the black hole. Such a wind caused by the emission of a quasar could create bubbles found in Teacup. 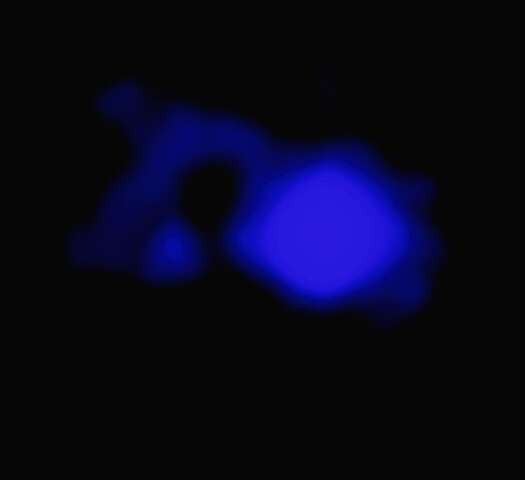 Astronomers have previously observed bubbles of various sizes in elliptical galaxies, galactic groups and clusters of galaxies, which were created by narrow jets containing particles moving at the speed of light that fly away from supermassive black holes. Jet energy dominates the power output of these black holes, not radiation. 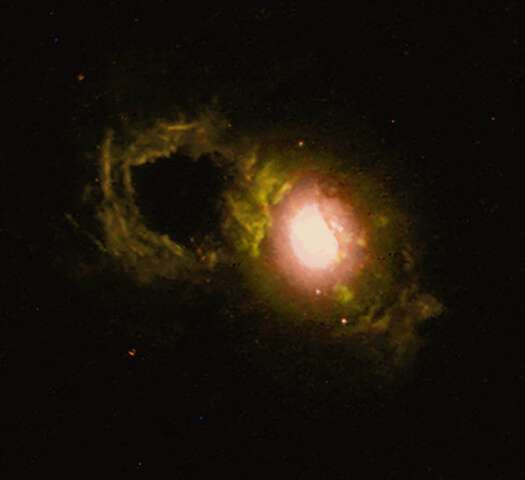 Astronomers have discovered that the power required to generate bubbles is proportional to their x-ray brightness. The radiation quasar Teacup follows this pattern. This suggests that radiation-dominant quasar systems and their cousins.