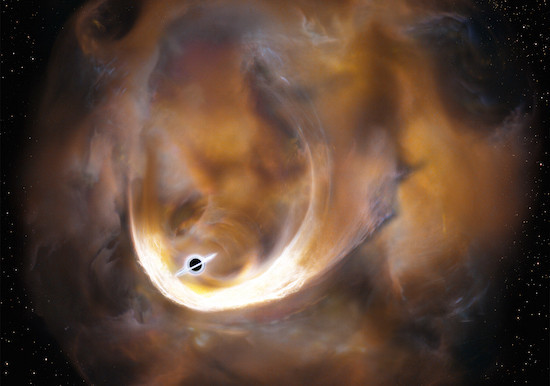 The object is about 200 light-years away from the center of our galaxy. Japanese astrophysics, using the radio telescope Nobeyama and the radio telescopes ALMA (Atacama Large Millimeter Array) installed in the Chilean Atacama Desert, discovered in the Milky Way a black hole with a mass of about 100,000 Suns. The scientific discovery is reported by the journal Nature.

The attention of scientists was attracted by the cloud of molecular gas CO-0.40-0.22, which differed by a surprisingly large range of speeds. A careful study of its kinematics made it possible to assume that the cloud consists of two components. One of them has a low density, but at the same time a considerable spread of molecular velocities, and the other, on the contrary, an extremely high density, but a narrow variance of velocities.

In addition, it was found that when the cloud molecules approach the center of mass, their velocity increases and reaches a maximum at the point closest to the object. Computer simulations showed that the best match for the observed pattern was demonstrated by a model using a gravity source with a mass of about 100,000 Suns.

Since X-ray and infrared observations did not allow us to identify any compact objects in the center of the cloud, astrophysicists suggested that either a cluster of neutron star remains or a medium-sized black hole could be hidden there. However, the first option, according to scientists, is implausible.

“We assume that CO-0.40-0.22 was the core of a dwarf galaxy that our Milky Way absorbed,” commented the study leader, Keio Tomoharu Oka University Professor.

Theoretical studies predicted that there should be from 100 million to one billion black holes in the Milky Way, but so far only 60 of them have been discovered by scientists.