In the photographs from Mars, we saw a shell 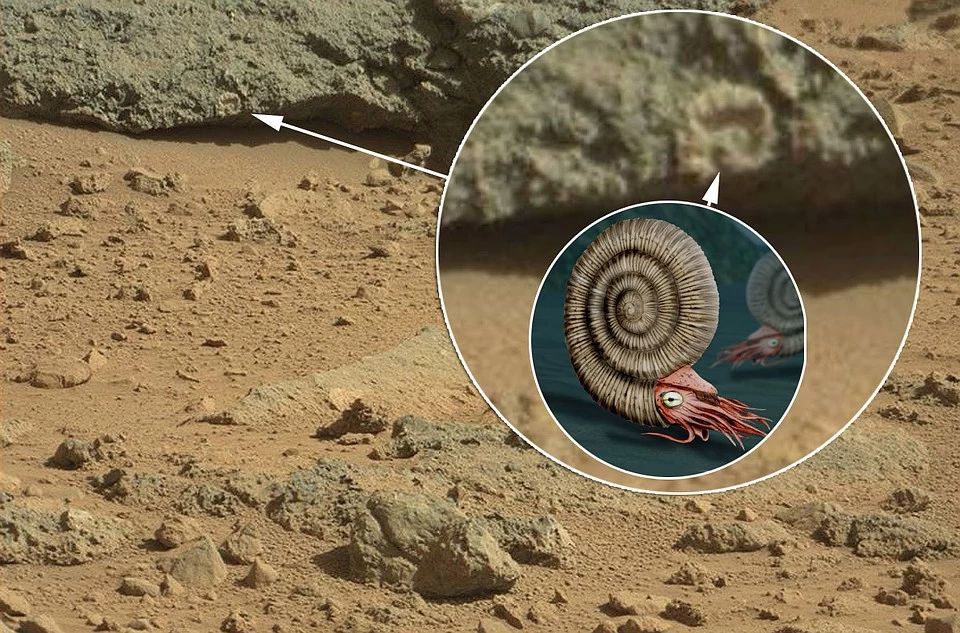 In the photographs from Mars made by the rovers, they considered a real shell, just like on Earth. The photos themselves were taken back in 2014, but bloggers have just noticed a strange object. In the photo there is a slope of a small hill, and something that strikingly resembles earthly “houses for snails” is “mounted” into this slope. In general, if you do not know what is happening on Mars, you might think that somewhere in the earthly desert they found another fossil.

The shell is most similar to ammonites. Such shells are found throughout the globe, including a lot of them in the suburbs. To find ammonite in the vicinity of Moscow, one needs to go down to a more or less deep ravine and see if there is a characteristic bluish clay. Found clay – consider ammonite in your pocket. In May of this year, the author of these lines found a whole bunch even within Moscow, in the park. In a word, on Earth – a fossil is not rare. But on Mars?

On Earth, ammonites lived in the seas, they could not tolerate fresh water. They hunted for everything – in this way they resemble modern squid. They died out together with dinosaurs 65 million years ago. Today, it is almost certainly established that the great extinction, which killed the ammonites along with the dinosaurs, caused a colossal asteroid. He fell to Earth, and something like a nuclear explosion happened. For decades, if not centuries, clouds of dust covered the sun. It got pretty cold. And the ammonites loved the warmth. By the way, the heat did not fully return. With the fall of the asteroid and the great extinction, the modern, relatively cold, geological era began under the name of Cenozoic. There is an original hypothesis why this is so. Dinosaurs were huge creatures, and traces of life left huge, too, tons. All this wealth saturated the atmosphere with carbon dioxide, that was warm, the natural greenhouse effect worked. It sounds incredible, but lately scientists are increasingly convinced that the climate on Earth depends on the biosphere.

And what was on Mars at that time? Already no one is surprised when he sees dried river beds in photographs from the Red Planet. So once rivers flowed, lakes and seas splashed, the sky was blue, and it was quite warm. Once it seemed to us that Mars is very unlike the Earth, and now the farther, the greater the similarities. Mars rovers explored clay deposits – they are no different from terrestrial. They even found something like silt, and silt is essentially life itself. Few people doubt that only official caution keeps scientists from officially announcing that life was on Mars at least in antiquity. But all this feast of biology on Mars was a very long time ago, about 3.5 billion years ago. When dinosaurs on Earth warmed up the atmosphere with their dung, Mars was already empty. Why so – we do not know very well. Far from the sun, chilly, the planet itself is smaller, worse holds air. Or maybe the asteroid also fell.

If Martian ammonite is not just another optical illusion, this leads to a startling fact: life on different planets is similar to each other. When an alien with arms, legs and a head is shown in a science-fiction film, someone will certainly snort: “It cannot be! “A man appeared from a purely earthly monkey, aliens will certainly be different.” And here is your untruth. It seems that biological evolution follows certain patterns, and we will not meet any completely incomprehensible monsters on other planets.

NASA astrobiologist David De Marais says: Yes, Martian organisms most likely resemble terrestrial ones. But the fact is that Mars and Earth are quite similar. These are the planets of the earth group, and life here and there is built on the basis of carbon and water. However, it cannot be built on anything else, creatures that breathe something else are fantastic, he is convinced. However, many argue with him.

There are a lot of disputes: what to say, we don’t even know for sure whether American devices found life in the late 1970s or not! Then the only biological experiment so far was carried out. The device scooped up Martian soil and looked at what stood out from it, whether the bacteria “breathed”. At first, everyone saw that, yes, the ground was breathing! Then the soil was sterilized (right on Mars), but he continued to “breathe”. From which they concluded – this is not life, but chemical reactions. Hurried then, they missed life, say Yuk Jung from the California Institute of Technology and Pin Chen from the Jet Propulsion Laboratory. In their recent article, they ask: what was the use of sterilizing the soil if the hard radiation of the Sun (Mars is not protected from it) sterilizes the surface even better. Obviously, bacteria on Mars learned to live with it. Are there few organisms on Earth that exist in “impossible” conditions, without oxygen, in sulfuric acid, in the bowels of faults at the bottom of the oceans? Or do you want a Martian living creature to wave your hand, then you will believe, in one of the publications, Mark Sims, a member of the ExoMars team, is ironic.

Well, probably, it’s only a few years that separate us from the moment when scientists will obtain undeniable facts: life on Mars was and is. Amazingly, ammonites appeared on the Red Planet, as on Earth. But there and there became extinct.