In the protoplanetary disk, acid was first detected 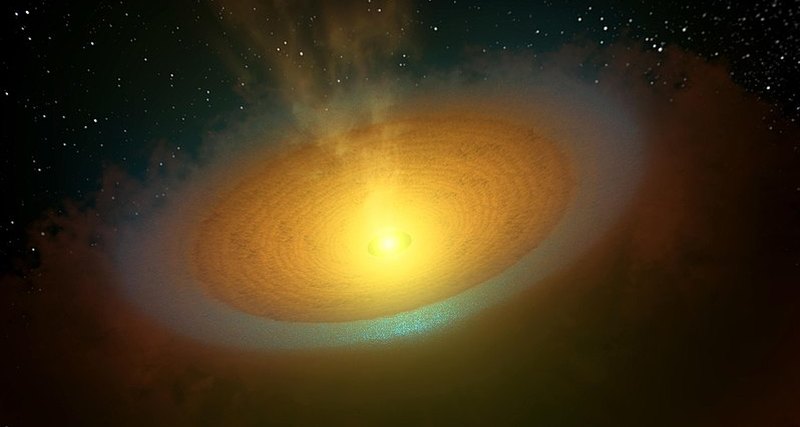 Astronomers have registered the emission line of formic acid in the spectrum of TW Hydra – the closest star to the earth, surrounded by a protoplanetary disk, in which planets are actively formed.

Star TW Hydra – orange dwarf is slightly smaller and lighter than our Sun, and much younger – it is less than 10 million years old, and the Sun – as much as 4.5 billion. Around TW Hydra is still spinning a protoplanetary disk in which at least one planet has already formed – a gas a giant the size of Jupiter. Once upon a time such a disk was surrounded by the Sun. Protoplanetary disks do not exist for long; during the first two or three million years of the existence of the star, their matter either dissipates, or gets lost in the planets and belts of asteroids.

The protoplanetary disk TW Hydra is a convenient object for observation: it is deployed to the Earth and is not so far away, in 176 light years from the Sun. Earlier, the lines characteristic of methyl alcohol were found in his spectra, and now a group of astronomers led by Cecile Favre, observing the TW Hydra by means of ALMA radio telescopes in the Atacama Desert, registered a line of formic acid HCOOH in the star spectrum. The distribution of acid in the disk was not yet possible to map. “Our discovery indicates that organic substances are actively synthesized in protoplanetary disks, including organic substances,” the scientists write in an article whose preprint was published at ArXiv.org.