Inside the remnants of the supernova 1E 0102.2-7219 in the Small Magellanic Cloud, astronomers have discovered a powerful source of radiation – but no one yet knows what can radiate so much energy where there should be a dead star.

Before you – 1E 0102.2-7219, supernova remnants in a dwarf galaxy-satellite of the Milky Way, known as the Small Magellanic Cloud. Unlike many other similar objects, these stellar remains have been studied very well – and, nevertheless, they do not cease to amaze astronomers. Recently, scientists were surprised to find among the clusters of stellar dust a powerful source of radiation radiation, but could not determine its nature. Hypotheses multiply: at the moment the most plausible version looks like the one according to which the most real neutron star hides in the center of this sinister purple ring from dust and gas!

Neutron stars are tiny, superdense objects radiating X-rays. Their mass can be equal to the mass of our Sun, but here the diameter of such a star will be only about 20 km across. They are so dense that their structure seems anomalous: the core consists of neutrons (hence the name), and covers its thin crust from heavy atomic nuclei and electrons.

A colorful cloud in the photo is the result of overlaying data from several telescopes. The ring was formed due to the luminous atoms of oxygen and neon – for the human eye, these clusters actually would look like clouds of green and red color if someone were lucky to observe such a grandiose cosmic phenomenon in the immediate vicinity. However, given that between Earth and the Small Magellanic Cloud is about 200,000 light-years away, today it is the farthest object ever found of this type. 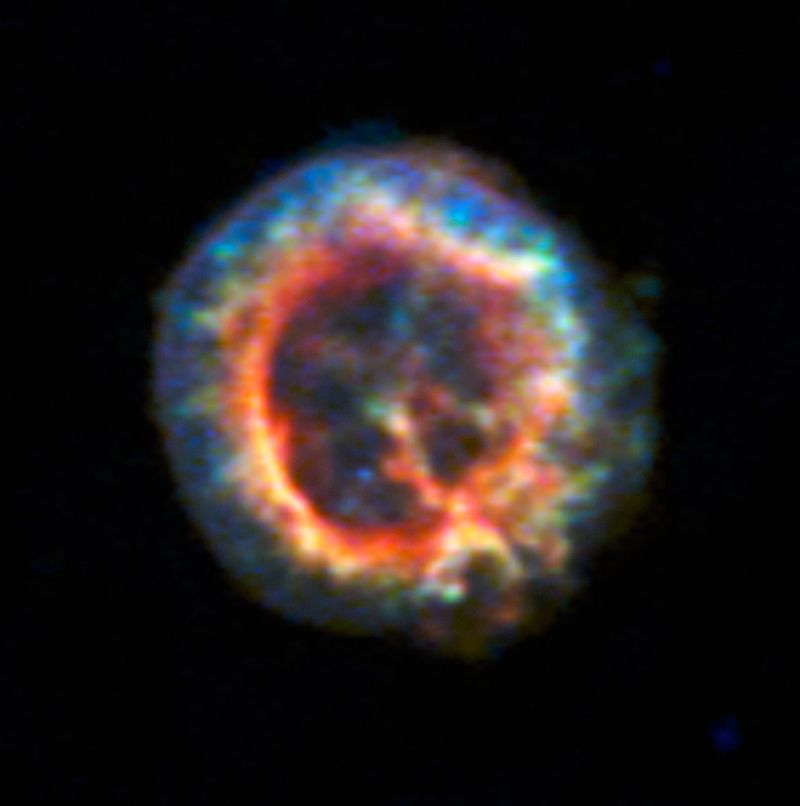 The Chandra X-ray Observatory pays special attention to the anomalous cosmic object – it emits strong radiation, but astronomers can not yet understand whether it comes from the remnants of a supernova or from something that is hidden in their center. In the picture, the radiation source can be seen as a small blue speck in the right lower part.