In the solar system flew an alien spaceship 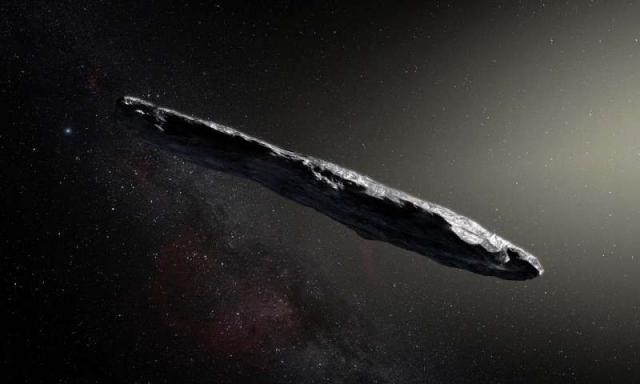 We have already written about a strange cosmic object that flew into the solar system and this event is very important, since it is the first such object entered into our solar system for the entire history of observations.

Fortunately, astronomers did not hide information about this event, but hastened to classify this object as an asteroid, but is it really so?

After all, according to the research data of this object, officially published by scientists and based on information collected using the “Very Large Telescope ESO”, this mysterious orbiting object from the interstellar space has a dark red color, the shape of an elongated cylinder and metallic in structure. Is it like an ordinary asteroid that supposedly traveled the universe for millions of years, and then accidentally flew into our system?

The obtained data rather indicate the artificial origin of this object and it is possible that this is an alien spaceship that has flown into our system for research purposes.

For the first time, this object was seen on October 19, 2017, by the Pan-STARRS telescope in Hawaii, where it looked like a weakly luminous point, but after computing the trajectory of the object’s movement, it became clear that this object was not from the solar system but came from interstellar space.

This is the first of the registered objects that did not form inside the solar system, like all other asteroids or comets, but flew into it from somewhere in the depths of the cosmos.

The object was first declared a comet, but its characteristics were so inconsistent with this definition that astronomers were forced to declare it an asteroid.

And this object entered our solar system and approached the shortest distance from the Sun – made a turn and headed back, where it came from.

The astronomers named this object – 1I / 2017 U1 (Oumuamua) and continued its study. The data received from the FORS receiver allowed obtaining object images in four different filters and it turned out that the object changes its brightness tenfold, rotating about its axis with a period of 7.3 hours.

Astronomers themselves admitted that this is very unusual for a simple asteroid and that these data show that the object has a very elongated shape, and its length is about ten times wider than the width, with complex, curved outlines. The color of this object is dark red. The composition of the object did not reveal the presence of traces of water or ice, and its composition is metallic. In length this object reaches 400 meters. The flight speed of the object reaches 90000 km / h!

Let astronomers continue to call this object an asteroid, but the most important thing is that now there is a hope that this event happened not just so, but some sensible civilization sent its spacecraft to collect data for our solar system and maybe this event is only the beginning of something more historical.