In the solar system, the first interstellar asteroid “immigrant” 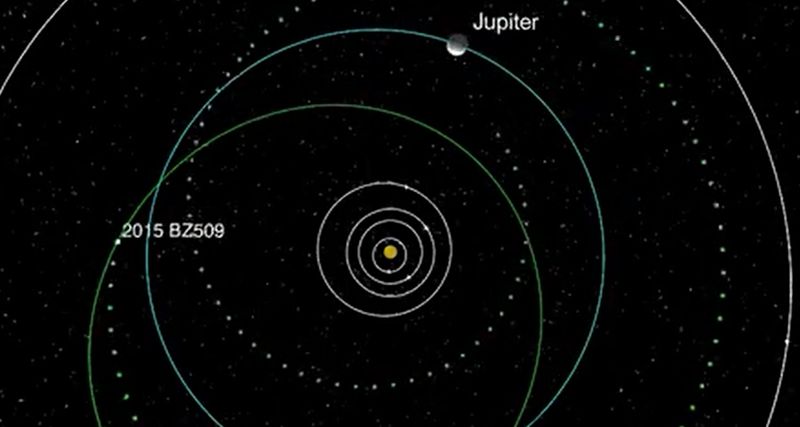 The scientists found that the asteroid 2015 BZ509, moving co-orbiting relative to Jupiter and rotating around the Sun, unlike most objects, in the retrograde direction (clockwise), probably arrived in our solar system from interstellar space. At the moment this is the first known object, which arrived in our system from interstellar space and “settled” in it.

Last year, for the first time, the interstellar object Oumuamua was discovered – an asteroid that flew into our solar system from interstellar space. This event, obviously, suggested that something similar happened in the past. Now the researchers have proved that this is indeed the case – and another interstellar object “lives” in our system for a long time. True, unlike Oumuamua, he “settled” in the solar system: Oumuamua will soon leave it, moving along an unclosed hyperbolic trajectory.

The asteroid 2015 BZ509 attracted the attention of scientists back in 2014, at the time of the first discovery. Most objects in the solar system – including all planets – rotate around the sun counter-clockwise. Of the thousands of asteroids, comets, planetesimals, planets, satellites – from all objects in our system – only 95 are known to orbit the star in a clockwise direction, in a retrograde direction.

Among these rare objects is also 2015 BZ509 (some astronomers call it Bee-Zed). In this case, Bee-Zed is in the orbit of Jupiter and rotates around the Sun with an orbital resonance of 1: 1, that is, with more or less the same speed as the gas giant – just in the other direction. “How this asteroid began to move this way, dividing the orbit with Jupiter, has remained a mystery to this day,” says Fathi Namouni, the lead author of the new work. According to the researcher, if the 2015 BZ509 were “born” in our system, it would have to have the same direction of motion as other objects formed from a cloud of gas and dust. With the help of computer simulations, specialists established that the asteroid moved in this direction for 4.5 billion years, and therefore it could not “be born” from the original gas-dust cloud, like the Earth and all other objects of the solar system.

The asteroid 2015 BZ509, scientists believe, can differ from other retrograde objects in the solar system – so the latter do not have to be “immigrants” from other systems. However, the discovery suggests that there are other interstellar objects in our system, which we do not know yet.