In the stratosphere of Titan found an unusual poisonous cloud 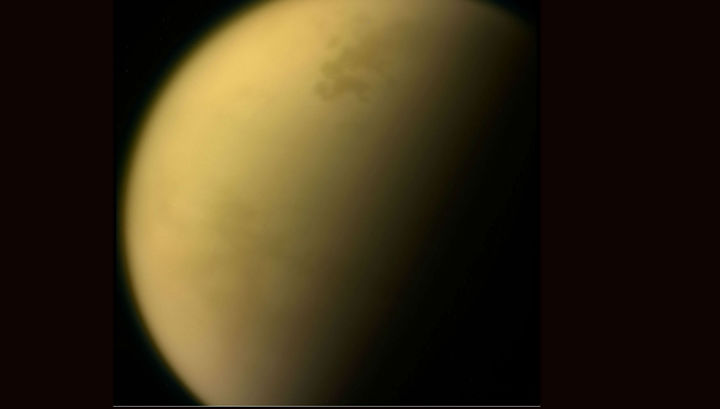 News about the discoveries in the Saturn system has recently come regularly. We had not time to admire the fact that the famous rings of the planet throw her atmosphere organic, as new news came from the mysterious Titan.

Titan is the only satellite in the solar system, having its own atmosphere. Waves of liquid methane beat there on ice rocks and rustle over flooded canyons. And under the ice shell of the planet, it seems, is hidden and the water ocean.

The complex organic chemistry of Titan makes scientists suspect that, in spite of the scorching cold, life can be born on this body, or even that it already exists there. That is why humanity condemned the Cassini probe, which we described in detail, to death in the atmosphere of Saturn. It was impossible to admit that the device fell on Titan: terrestrial bacteria that could be stored on board would change the history of the local biosphere.

Although the Cassini probe is no longer available, the processing of the data it receives continues. October 18, 2017 NASA issued a press release, which reported on a new interesting discovery.

The fact that clouds are accumulating over Titan’s poles has long been known. This seasonal phenomenon: in the summer couples with “warm” by the standards of the satellite of the methane seas are carried away by the winds to the cold polar regions. Gloomy clouds of methane gather over the pole of the hemisphere where it is now winter (it lasts, by the way, for long seven terrestrial years, almost like in Västerås). “Cassini” first noticed such clouds over the north pole of Titan soon after his arrival. Shortly before the end of the mission, when about half of the local year had passed, the same cloud appeared in the southern polar latitudes.

The “white winged horse” of a new type was observed by astronomers over the south pole, analyzing the observational data for July-November 2015. All this time on Titan reigned late autumn. The cloud hung above the surface at a height of 160 to 210 kilometers, that is, in the satellite stratosphere, much higher than the rain cloud clouds. At the same time, it covered a huge area, stretching from 75 to 85 degrees south latitude. The infrared spectrum of the cloud turned out to be very unusual. Specialists could not immediately determine its chemical composition. 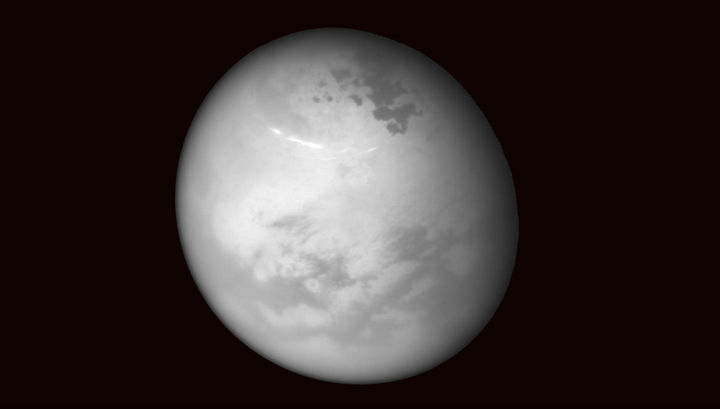 Laboratory experiments began. The researchers took various substances that might occur on Titan, and compared their spectrum with the observed. Eventually it turned out that the mysterious cloud consists of a mixture of benzene and hydrogen cyanide (the one that, in conjunction with water, gives deadly hydrocyanic acid).

Clouds of cyanide in the atmosphere of a mysterious satellite have already been found, but not in a mixture with benzene. On the ice expanses of the stratosphere of Titan, this mixture passed into a solid state. She also radiated such unusual infrared waves.

Over the north pole of the satellite, a similar cloud was already observed. It was found in data as early as 2005. But it hung below 150 kilometers and differed in chemical composition. The northern cloud consisted of a mixture of hydrogen cyanide with cyanoacetylene, one of the most complex organic substances ever found in the atmosphere of Titan.

The immediate task of researchers is to find out the structure of the newly discovered cloud. For example, to answer the question, is such an unusual ice in the stratosphere of Titan amorphous or crystalline.

By the way, “heavenly clouds” performed by Titan are not the first to surprise scientists. Specialists already had to revise the mechanism of their formation.