In the subglacial ocean Enceladus discovered a complex organic 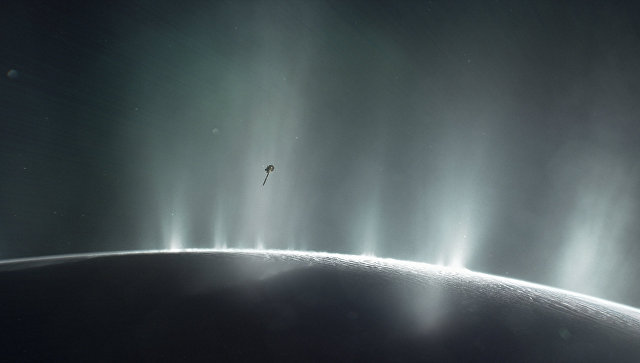 The latest data from the deceased Cassini probe indicated the presence of complex organic molecules on the surface of Enceladus, a potentially inhabited satellite of Saturn, and in the waters of its subglacial ocean. This is written by scientists in an article in the journal Nature.

“Enceladus once again surprised us.” Earlier we were able to find in space only the simplest organics in which several carbon atoms were present, and even this was considered a miracle, and we managed to open molecules with a mass ten times greater than methane. , this moon is so far the only planet, besides the Earth, which has everything – water, organic matter, a source of energy – for the birth of life, “says Christopher Glein of the Southwest Research Institute in Boulder, USA.

In 2005, Cassini discovered on Enceladus streams of particles of water ice and steam, which are ejected into outer space from parallel cracks near the south pole – the so-called “tiger stripes”. This discovery posed to scientists the question of the source of this pair and ice.

In March 2015, 10 years after the discovery of tiger stripes and geysers on Enceladus, the Cassini probe showed that in the bowels of this satellite of Saturn there is a global ocean of liquid and hot water. His “gave away” particles of sand and frozen water droplets, thrown into space from the southern pole of Enceladus, together with eruptions of geysers.

Two years ago, planetologists found a potential source of energy for life on Enceladus – hydrogen molecules in its emissions, as well as alcohol-methanol. Such discoveries cause scientists to argue increasingly and more bitterly about whether life can exist in its waters and how it should be sought. One of the following “medium” NASA probes, the ELSAH project, will be sent to Enzadz just to find the answer to this question.

These discussions will become even more heated thanks to the discovery that Cassini made during the last rapprochement with Enceladus in December 2015. During this “rendezvous” the probe flew about 5 thousand kilometers from the surface of the moon of Saturn and collected a large number of particles of dust and frozen ice crystals thrown out by its geysers.

The chemical composition of these dusts and ice was analyzed by two mass spectrometers, CDA and INMS. Both of these devices were manufactured more than twenty years ago, because of which their capabilities were very modest – they could determine the types of atoms and the mass of molecules present in these samples of matter, but not their formulas.

This is sufficient for the detection of simple molecules such as water (mass-18), ammonia (17) or methane (16), but not enough to reveal the composition of complex hydrocarbons, proteins and other organic matter. Nevertheless, a high mass of compounds and some features of their spectrum can give out more complex substances.

For example, both instruments indicated the presence of complex and heavy compounds in Enceladus’s emissions, whose weight exceeded 200 atomic mass units. They, as hinted at the spectrum of their individual fragments, were complex organic molecules, some of which belonged to the number of aromatic hydrocarbons, while others were alcohols and amines.

All these molecules are considered today as one of the main “bricks” of life, from which all the components of the cells of living beings are composed. As scientists emphasize, the same molecules can also arise abiogenically, but how they could appear in the ocean of Enceladus is not yet clear.

On the other hand, now we can safely say that on Enceladus there is not only a potential source of “food” for future microbes in the form of hydrogen molecules, but also “building blocks”, from which the first extraterrestrial organisms may or have already arisen. This, according to the authors of the article, significantly increases the scientific value of sending a re-mission to Saturn.

“Our discovery is important not only for us, but also for future generations.” The new probes must fly through Enceladus’s emissions and study these molecules with high-resolution spectrometers, which will help us to disclose their birth story. “In any case, now we can seriously think about , that these substances can have a biogenic origin, “- concludes Glein.