In the vicinity of the Sun found a star stream 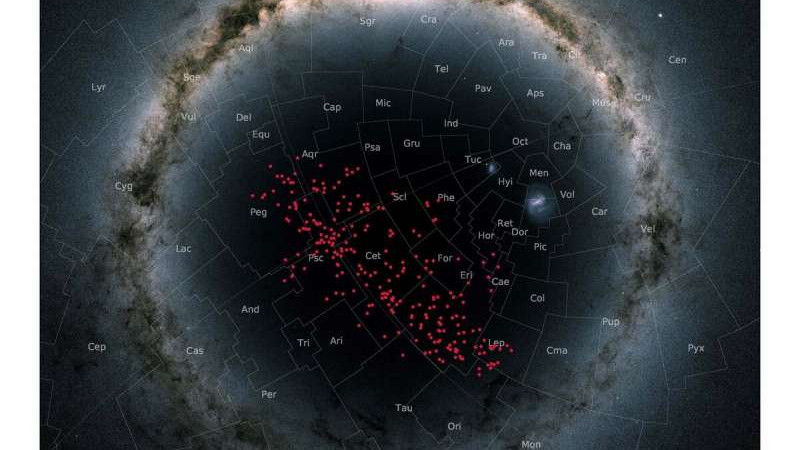 The stream is relatively close and contains at least 4000 stars that move together since their formation about 1 billion years ago. Because of its proximity to Earth, this stream is an ideal place where you can check the destruction of clusters, measure the gravitational field of the Milky Way, and learn about exoplanet populations for upcoming missions to search for planets. For the search, the authors used data from the ESA Gaia satellite.

Our Milky Way is home to star clusters of various sizes and ages. Scientists have found many young clusters in molecular clouds, fewer clusters of middle and older age in the galactic disk, and even fewer massive old globular clusters in the halo. Regardless of their origin and age, clusters are subject to tidal forces along their orbits in the galaxy. The Milky Way’s gravitational forces relentlessly tear them apart, scattering their stars throughout the galaxy. “Most star clusters in a galactic disk quickly dissipate after their birth, as they do not contain enough stars to create a deep gravity well, in other words, they do not have enough glue to hold them together. In the vicinity of the Sun, there are several clusters with enough stellar mass to remain connected for several hundred million years. Therefore, such large, stream-like, remnants of clusters or associations should also be part of the Milky Way disk, ”says Stefan Meingast, lead author of an article published in Astronomy & Astrophysics.

Thanks to the accuracy of Gaia measurements, the authors were able to measure the three-dimensional motion of stars in space. Having carefully studied the distribution of neighboring stars, the researchers immediately came across a group of stars moving together, still unknown and unexplored. This group of stars showed exactly the expected characteristics of a cluster of stars born together, but stretched by the gravitational field of the Milky Way. “Identifying nearby disk flows is the same as looking for a needle in a haystack. Astronomers have long looked at this new stream and through it, as it covers most of the night sky, but only now have realized that it is there, it is huge and amazingly close to the Sun, ”says Juan Alves, the second author of the article. “Finding something close to home is very useful, which means that it is not too weak or too blurred for further detailed research, which astronomers always dream of.”

Due to the sensitivity limitations of the Gaia observations, their sample contained only about 200 sources. Extrapolation beyond these limits suggests that the flow must consist of no less than 4,000 stars, which makes the structure more massive than most known clusters in close proximity to the Sun. The authors also determined the age of the stream – about 1 billion years. He had already completed four complete orbits around the galaxy — enough time to develop a flow-like structure as a result of gravitational interaction with the Milky Way disk. “As soon as we explored this group of stars in more detail, we realized that we found what we were looking for: a smooth, flow-like a structure extending hundreds of parsecs across a third of the entire sky, ”says Verena Fürnkranz, co-author and undergraduate student at the University of Vienna. “It was very exciting to be part of the new discovery.”

This newly discovered nearby system can be used as a valuable gravity probe to measure the mass of the galaxy. Thanks to the subsequent work, this stream can tell how the galaxies get their stars, check the gravitational field of the Milky Way and, thanks to its proximity, become an excellent target for the planet search missions. The authors hope to discover more such structures in the future using the rich Gaia database.