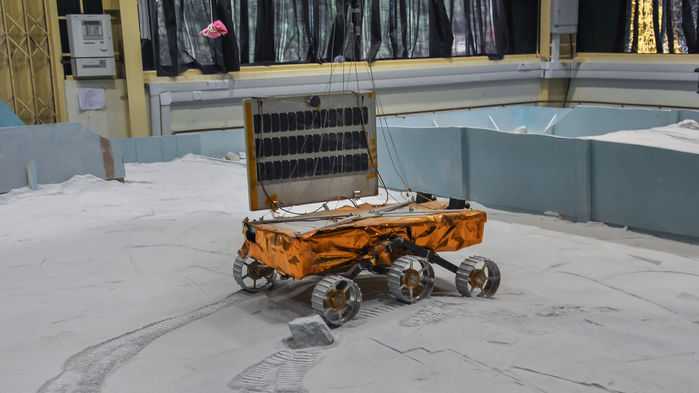 In mid-summer of 2018, the orbiting spacecraft will land a landing module on the surface of the Moon. The landing will take place without the participation of specialists on Earth, because it will occur near the southern pole of the Moon – where radio signals do not reach.

A soft landing should pass 600 kilometers from the south pole of the natural satellite of the Earth – where none of the man-made objects worked yet; all the rest sat much closer to the equator. The landing module will deliver to the surface of the Moon an Indian rover “Chandrayaan-2”, which should work for at least a year.

“Chandrayaan-2” will become the second Indian lunar mission; The first, “Chandrayaan-1”, consisted of an interplanetary orbital station and a landing module, which in 2008 made a hard landing near the southern pole of the Moon. Communication with the Chandrayaan-1 orbital station disappeared almost a year after that, but during the time she managed to gather information that allowed Indian specialists to choose a landing site for the second mission. Another important achievement of the Chandrayaan-1 mission was not the first, but definitive, proof of the presence of water in the lunar soil: the orbital analyzers found it in a cloud of dust raised during landing.

The launch of the launch vehicle with the Chandrayaan-2 missions should take place in a few weeks. As Siywan said to Kailasavadiv, head of the Indian Space Research Organization, if the mission is successful, it will pave the way for new, even more ambitious plans for the development of the solar system, including landing on Mars, asteroids and even launching a Venusian probe.

The instruments of the landing module and the Lunokhod allow to collect data on the composition of the rarefied lunar atmosphere, the distribution of helium isotopes in it, to estimate the content of helium-3 in the lunar atmosphere, and the potential fuel for thermonuclear reactors. The heads of several world governments have already spoken out about the value of the moon as a source of helium-3. According to existing estimates, the lunar reserves of this light isotope could be sufficient for thousands of years of providing humanity with energy. In addition, the “Chandrayaan-2” rover spectrometer will have to estimate the amount of water on the Moon and its temperature, and the seismometer of the lunar rover will measure the seismic activity of the satellite.

Initially, it was planned that the Indian lunar rover would bring a Russian-made apiary to the surface, but after the failure of the mission of Phobos-Grunt Roskosmos ceased cooperation with India, and the Indians developed their own landing module. To launch the device, India plans to use its own carrier rocket GSLV, which starts from the cosmodrome of Shriharikot on the island of the same name off the southeast coast of India.