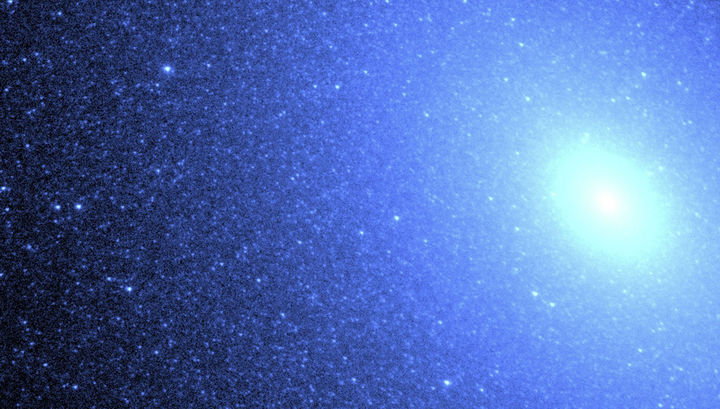 All galaxies radiate radio waves, but some of this is much better than the rest. The range of values ​​ranges from 10 thousand to 100 billion full luminosities of the Sun (if we do not talk about quasars, which are even more powerful).

Star systems from the upper part of this range (radio emission from 1 to 100 billion full solar luminosities) are proudly called radio galaxies. Usually these are large elliptical galaxies, numbering from 1 to 10 trillion solar masses.

The radio emission from galaxies is not emitted by stars. Of course, the stars also emit radio waves, but it is too weak for even such a cluster of stars to be discernible in radio telescopes. In the radio station, the galaxy turns a nucleus with its most powerful magnetic field. Electrons rotate in this field at a speed close to light, and emit radio waves. This phenomenon is called synchrotron radiation.

Radiant electrons “live” not only in the nucleus itself. Often they form clouds, jets and other structures that extend far beyond its limits.

Since the advent of radio astronomy, radio galaxies have already counted many thousands. But here, as in many other matters, size matters.

So, there are radio galaxies, in which the size of the radio wave radiating region exceeds the megaparsec (recall that the parsec is 3.26 light years). They are rightly called giant radio galaxies. Astronomers have long been interested in these objects.

First, with the radio galaxies, science is far from everything. How do they arise, how evolve, how many live? What mechanism “pumps” the electrons with energy? What are the physical conditions in some parts of these curious formations? Astronomers already know this a lot, but there are enough open questions. The study of such an exotic species of radio galaxies, like giant ones, helps to search for answers. 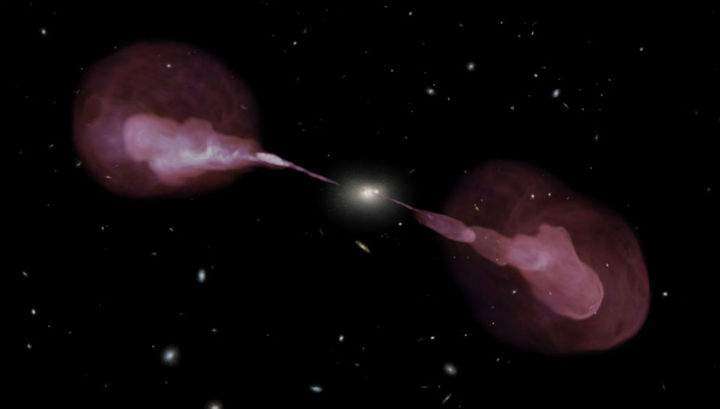 Secondly, in these radio sources, clouds of emitting electrons extend far beyond the parent galaxy (even if we take into account that the boundaries of the latter are rather blurred). They are in direct contact with intergalactic hydrogen. So, when observing such objects, one can draw conclusions about the properties of the intergalactic medium.

Finally, a giant radio galaxy can belong to a group of galaxies. In this case, its dimensions are comparable with the size of the group itself, and it will participate in its evolution.

Giant radio galaxies know about a hundred. But even against this background, the recent discovery of Indian astronomers makes an impression.

A team of scientists led by Biny Sebastian from the National Center for Radio Astrophysics of India published a study in which he announced the discovery of a new giant radio galaxy. Scientists observed it in the radio telescope GMRT at a frequency of 150 megahertz.

The detected object was designated J0844 + 4627. Numbers mean the coordinates on the celestial sphere. It was also observed in the optical range, using a two-meter telescope of the GIRwali observatory. This allowed us to determine its redshift, equal to 0.57. The last parameter allows you to calculate the distance to the object. In this case, it turned out to be about six billion light years.

Knowing the distance to the stellar system and the angular size of the radio galaxy, it was possible to determine its extent. It was equal to 7.17 million light years.
This is a very impressive figure, although it is far from the record of the galaxy J1420-0545 (16 million light-years). Such large radio galaxies at such distances from Earth are extremely rare. This, as they say, piece goods. Each new discovery can help to understand the cosmological evolution of such objects.

The observation of the radio galaxy at other radio frequencies made it possible to construct the spectrum of its radiation and, thanks to it, to estimate certain physical parameters of J0844 + 4627. For example, scientists calculated the upper limit of the age of the radio source. It turned out that the “radio station” in this galaxy at the time of emission of earthwaves received by the earthmen was no more than 20 million years old. This, however, did not come as a surprise: such values ​​are typical for radio galaxies.

Surprises found object, it is necessary to think, still will present. After all, his study is just beginning.