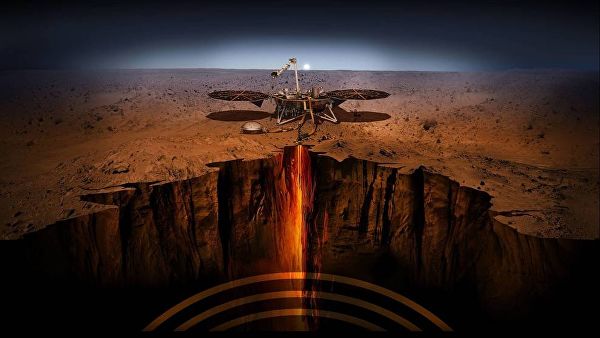 The seismometer of the InSight landing module, installed on the surface of Mars at the end of December, passed all the tests and began to observe the earthquake, the press service of the National Center for Space Research of France (CNES) reports.

“We started checking the seismometer on the first day of the new year, and now we can say for sure that it passed all critical tests. In other words, there is now the first device of this kind on the surface of Mars. This is indeed a historical moment and great hope for all geophysicists Earth, “- said the scientists.

The descent module InSight made a successful landing on the Elysian Plain at the equator of Mars in early December of last year. He became the official heir of another NASA geologist probe, the Phoenix Lender, who landed on Mars in May 2008 to search for traces of life and water in its soil.

A seismograph is installed on board, as well as a geophysical thermometer, which will be installed in a five-meter well for measuring the temperature of the depths of Mars. One of the instruments of the probe will track the rotational fluctuations of the planet with high accuracy, which will help determine the mass distribution in the interior of the planet and better understand its internal structure.

Initially, NASA planned that InSight will travel to Mars in March 2016. Due to problems with the SEIS seismometer, manufactured by French engineers and scientists on the order of CNES, its launch was shifted to the first half of 2018.

At the end of December, the probe successfully deployed solar panels, extended its arm and installed a seismometer in one of the flattest and safest points in its immediate vicinity. The next two weeks, French scientists and NASA experts spent on aligning the position of the sensor and its calibration.

Despite the fact that SEIS has already begun to conduct observations, the installation procedure has not yet been fully completed. In the near future, the robotic “arm” of the landing module will cover it with a special lid, similar to the upper part of the double boiler, to protect it from temperature changes, sand and the Martian wind.

As scientists hope, over the next three years of operation, the seismometer will record at least one marshot shake. Its discovery will help to study the structure of the planet’s interior and find the sources of such fluctuations.