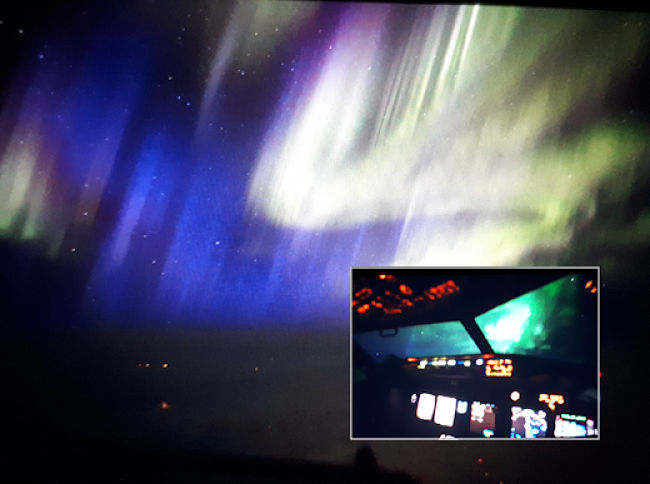 Pilot Matt Melnik said that he has been flying on airplanes for 20 years, 10 of which makes pictures of the Aurora, but he had never seen such a radiance before. This incredible shot he made from an altitude of 11.9 km. Aurora-colored electrician lit up the sky during a night flight from Edmonton to Toronto about 4 am over the northern part of the Canadian province of Manitoba. Miller managed to take several pictures with a mobile phone.

Auroras usually glow green – this is a sign of oxygen. Rare blue auroras are associated with nitrogen molecules. Energy particles that attack nitrogen molecules in the upper layers of the Earth’s atmosphere can cause azure glow during intense geomagnetic storms.
During the storm, the Northern Lights spread across the sky across the Canadian border to the south of Indiana (USA). A student of Purdue University, Hunming Zheng, saw a blue glow just 8 km from his hostel. He said that he began to prepare for bed on the night of April 20, when he read the news about the interplanetary shock wave. Zheng immediately went north to admire the heavenly flaws. A weak green glow appeared at 2 am and disappeared, but soon after 5 am a sudden surge occurred. The violet pillars were easily visible to the naked eye.