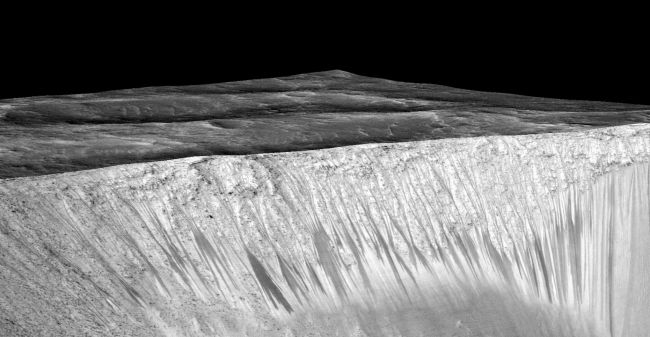 Intriguing dark strokes on the slopes of Mars may not have anything to do with liquid water. These long, narrow features of the surface of the Red Planet, which became known as repeating lines on the slope (RSL), appear near the Martian equator for several weeks in the warmest seasons. They were discovered in 2011 by scientists studying images taken by NASA MRO.

Some scientists claim that RSL forms transitional streams of salt water, which means that they can be signs of a potentially livable environment – this idea was reinforced by the data for the year 2015, when MRO identified hydrated salts in these places.

But liquid water is not the only possible explanation. For example, some researchers have suggested that RSL causes seasonal freezing and freezing of carbon dioxide, while others argue that it is avalanches of dry dust and sand.

A new study, which was published on Monday (March 20) in the journal Nature Geoscience, speaks in favor of the latter hypothesis. A team of scientists led by Frederick Schmidt from the University Paris-Sud in France, modeled RSL with the help of numerical simulation. This modeling work showed that only sunlight alone can cause landslides on the slopes of RSL due to the effect of “thermal creep”.

That is, the heating of the sun destabilizes the material on the slopes of RSL, reducing the “angle of the slope” and causing landslides.

“Because of the solar insolation in the soil, the temperature rises and the air moves in the porous space of the post, which in turn destabilizes the pellets,” says Schmidt. “This effect is enhanced when there is a shadow of a boulder. Therefore, the source seems to be boulders. ”

Indeed, the team models suggest that to start RSL flows, boulders are needed nearby, scientists write in a new study.

The simulated flows perfectly correspond to the actual RSLs observed in the Garni crater on Mars, emphasize the seasonality of these features and their predominance on certain types of slopes, the team members say. For example, veins in the Garni crater are more common on the western slopes than on the eastern slopes, because the former absorb more solar energy.

The prognostic success of the “thermal creep” model is not yet all the evidence supporting the dry landslides, Schmidt and his colleagues believe. On the one hand, the potential source of water in RSL remains a mystery. Condensation of atmospheric water on the Martian equator – in the driest part of the planet – is unlikely, the researchers say, while deep-seated ice is unstable at RSL sites. In addition, underground aquifers can not explain the RSL near the rim of the crater.

In addition, the RSL bands are narrow and straight, like the dry avalanches on Earth. The dark color of RSL does not have to mean humidity.

“We interpret the relatively dark manifestation of the RSL albedo as the effect of sorting the pellets during the flow,” they write. “Smaller grains should be thrown out of the stream. The attenuation is due to the smaller eolian (windmill) distribution of the granules from the atmosphere. ”

Even hydrated salts can not explain liquid water. Laboratory experiments have recently shown that water in RSL salts can originate from the Martian atmosphere, rather than from a nearby surface. Therefore, scientists have to do some more work to finally explain the origin of RSL.