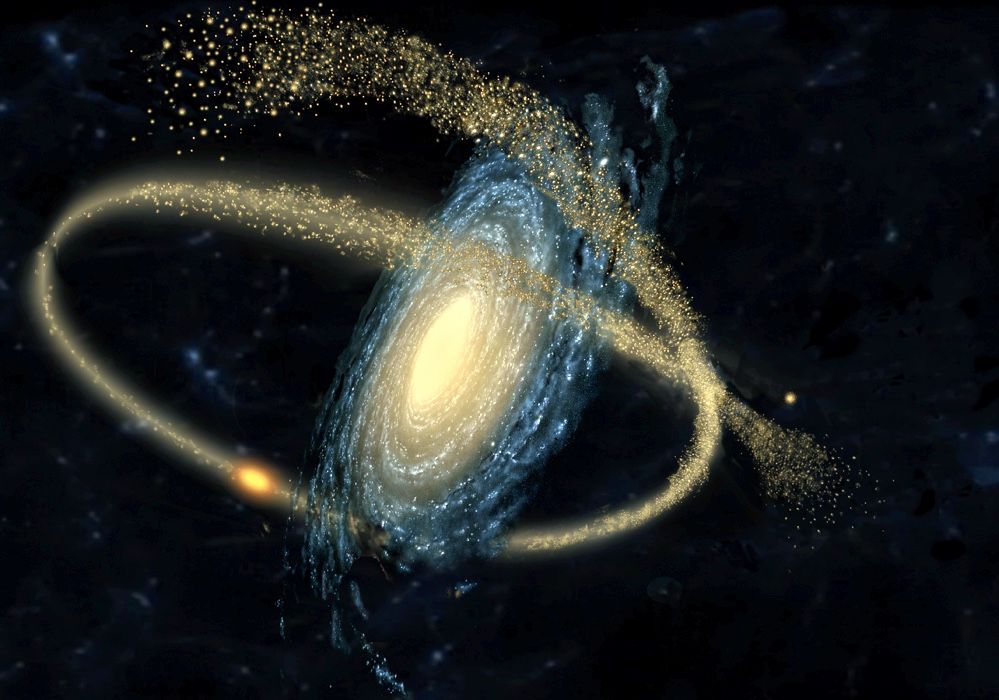 In the stellar streams of our galaxy revealed torn “holes” – perhaps left a huge clots of dark matter.

When a large galaxy absorbs a small galaxy or globular cluster, they twist around its center, turning into star currents stretched by gravity. In the Milky Way, dozens of such objects, former clusters and dwarf galaxies, are known. One of the longest is the GD-1 stream, and one would expect that there would be only one “gap” in the line in which its stars were stretched — a place with a reduced number of luminaries, the starting point from which they began to diverge.

However, astronomers of the Harvard-Smithsonian Center for Astrophysics discovered that the stellar flow has at least one more, previously unknown gap, and in its vicinity the distribution of stars is disturbed, forming something like a prong. Everything looks as if GD-1 was pierced by a colossal “shell” – an unknown object that left a torn “wound”. About this Ana Bonaka (Ana Bonaca) told in a report that was presented at the meeting of the American Physical Society (APS) in Denver.

The distribution of stars in the stream GD-1. Gaps are noted, including possibly associated with the source of the stream (Progenitor), as well as the prong (Spur) / © Ana Bonaca, New Astrophysical Probes of Dark Matter, GAIA

“We cannot associate this“ projectile ”with a single radiating object observed, says Bonaka. – It is much more massive than a star, something of the level of a million suns. Stars of such a mass does not happen, it can be excluded. And if it is a black hole, then it should be a supermassive black hole – like the one that is located in the center of our Galaxy. ” However, we probably would have noticed the presence of the second giantess as we observe the numerous effects of the supermassive black hole Sagittarius A *. Most likely, the “wounds” of the stellar flow could cause dense massive clots of dark matter.

This mysterious form of matter does not enter into the usual one of any type of interaction, except gravitational. It is impossible to see, but it has a decisive influence on the growth and evolution of galaxies and the large-scale structure of the Universe. A clot of dark matter, ranging in size from 30-65 light years, could well have made a hole in the stellar flow. Of course, one cannot completely reject the possibility that the “projectile” was, after all, a particularly dense cluster of stars and simply cannot be identified.