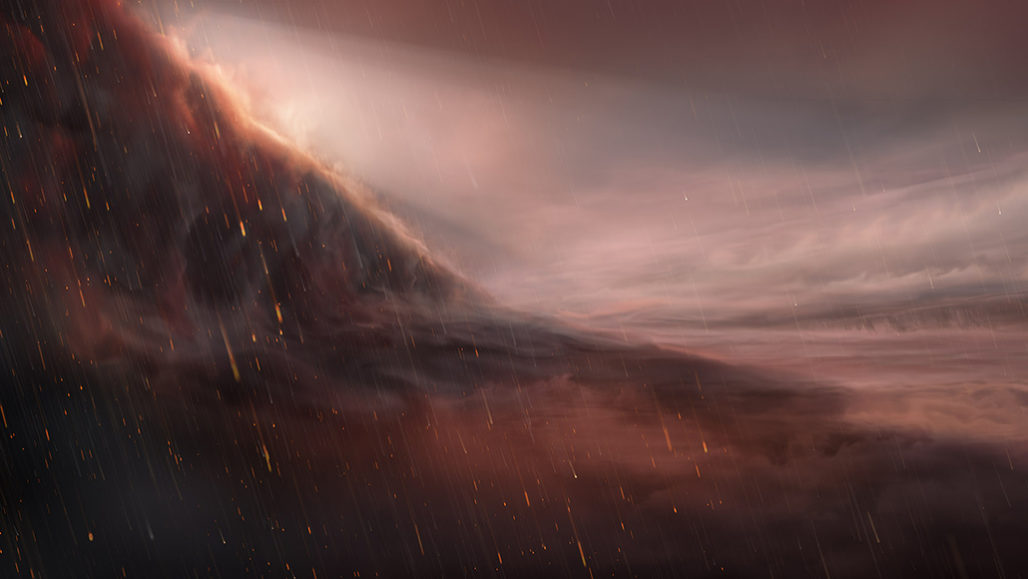 If someone happens to get caught in the rain on a distant planet WASP-76b, they will have to defend themselves with something more serious than an umbrella. Astronomers conducted a detailed analysis of the spectrum of this exoplanet, located approximately 400 light years, and came to the conclusion that the rains here should be “iron”. About this, David Ehrenreich (David Ehrenreich) from the University of Geneva and his co-authors write in an article published in the journal Nature.

WASP-76b was discovered in 2013 among the three large and “loose” planets discovered in a Sun-like star in the constellation Pisces. The mass of WASP-76b is more than 0.9 of the mass of Jupiter, and the radius is 1.8 from Jupiter. Since its orbit lies 30 times closer to the star than the Earth’s orbit, WASP-76b is classified as super-hot gas giants.

Such planets water huge fluxes of radiation and particles, so that the temperature on the day side can reach enormous values. These objects include the hottest known KELT-9b exoplanet, which is heated above 4000 ° C – hotter than some stars. However, the night side retains a fairly moderate temperature.

It was this contrast that interested scientists who studied its effect on the atmosphere using WASP-76b as an example. They examined the gas giant with the VLT telescope of the ESO European Observatory, tracking the two transits of the exoplanet – its passage against the background of the parent star. The collected spectral data made it possible to distinguish the difference in the composition of the atmosphere of the day and night sides.

The day side of WASP-76b is almost 1000 ° C hotter than the night one, and scientists have noticed that gaseous iron continuously leaks from the warmer hemisphere to the colder one. Here it should condense and fall out with heavy drops of “metal rain”.

The gas giant does not have a solid surface on which “iron puddles” could gather. Apparently, the condensate plunges into the bowels of the planet and reaches depths at which temperature and pressure again rise to extreme values, and iron again turns into gas, gradually migrating into the atmosphere.