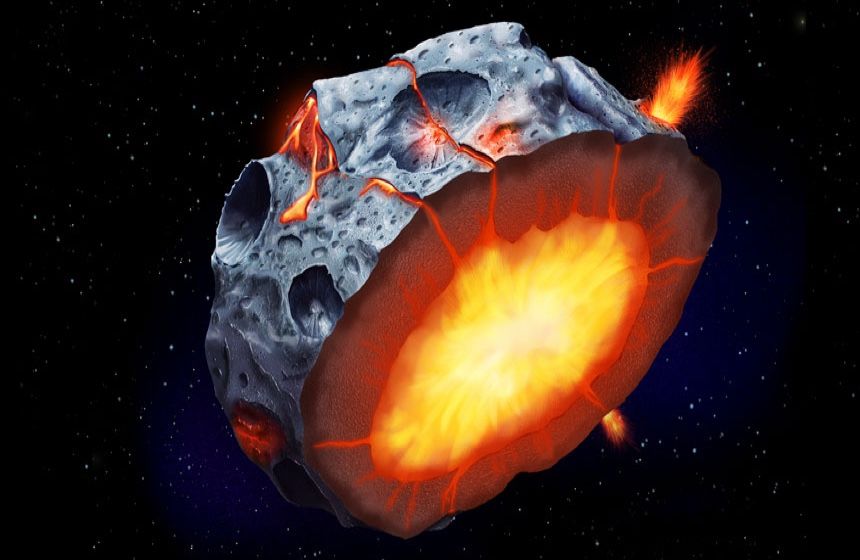 Geologists have suggested the existence of an exotic form of “ferrovolcanism” on young and not yet completely frozen iron asteroids.

At a conference on exploration of the moon and planets held in Texas, reports were made of a new form of volcanism that can exist on large iron asteroids during their youth. Such objects are considered to be “stopped in development” by the heavy nuclei of planetesimals, the embryos of planets, which failed to turn into larger bodies. At first they remained molten, but the deprived iron quickly cooled and hardened from the outside to the inside, forming a stiffened bark.

Its density is higher than that of the molten metal, and this difference (which also participates in the occurrence of volcanoes of the Earth’s lithosphere) should have led to an unusual “ferrovulcanism”. Jacob Abrahams of the University of California, Santa Cruz spoke about this mechanism in his speech. In fact, a lighter and mobile molten material should tend closer to the surface and be squeezed out through cracks in the crust. This ferrovolcanism could continue until the asteroid finally cooled and solidified.

Such a volcanism was also talked about by speaking at the conference Brandon Johnson (Brandon Johnson) from Brown University, who proposed another mechanism of its action. According to this version, the molten “protoasteroid” could contain silicon and sulfur dissolved in iron. During the natural stratification, the materials separated, forming a dense core of molten iron with sulfur admixture, as well as a lighter silicon bark. As the core cools, it can contain liquid, relatively light and floating parts with a high sulfur content. They could float to the surface, squeezing liquid metal through cracks.

To test these interesting hypotheses, it may be possible quite soon. In 2022, it is planned to launch the American Psyche probe, which will go to the main asteroid belt, to (16) Psyche – a heavy iron body, the surface of which may have retained traces of ancient “ferrovolcanoes”. The arrival of the vehicle to the site should take place in 2026.