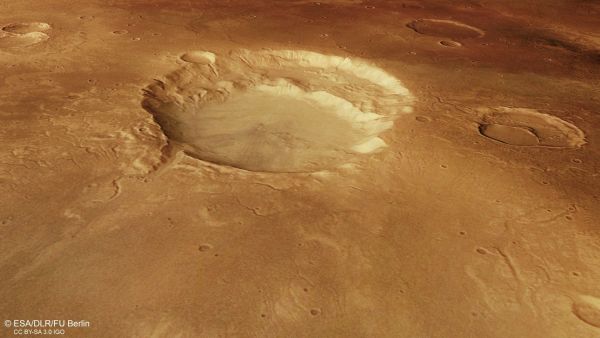 Astronomers have offered an explanation for why some of the craters on Mars are irregularly shaped. The reason experts call landslides. This was reported in a press release on the Phys.org website.

Most craters are circular due to the ejection of material in all directions as a result of the impact. Complex craters, on the other hand, are large depressions with complex features such as terraces, central peaks, and edges and walls with various relief features. They may be caused by asteroids hitting the surface of Mars at a very sharp angle.

NASA researchers analyzed oblong craters in the Martian region of Noachis Terra using the HiRISE camera on the Mars Reconnaissance Orbiter. They believe that the irregular shape arose because large volumes of rocks in the northeast and northwest parts of the crater slid to the bottom due to landslides.

HiRISE (High Resolution Imaging Science Experiment) is a camera installed aboard the Mars Reconnaissance Orbiter to study Mars. Since arriving in orbit around the Red Planet in 2006, it has already taken hundreds of thousands of high-resolution images of the surface of Mars.