Is it impossible to find a duplicate of the Earth? 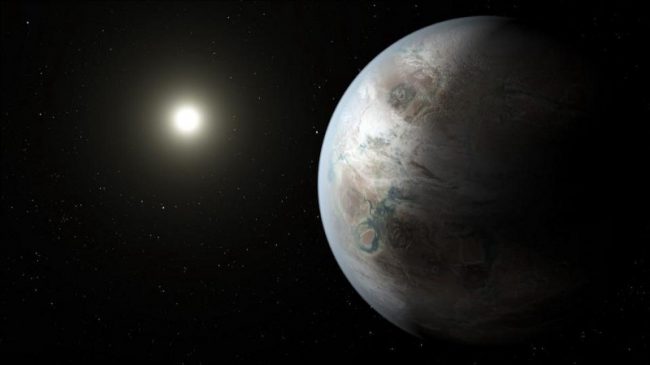 Of all the places that we have ever seen in the universe, only the Earth has provided us with evidence of the existence of life. But why? Because life is a rarity, and it requires from us all the conditions that we have on Earth to be supported? Or because life is omnipresent, but we found it here, because here it was easy to find it?

Since everything is arranged on the Earth as arranged, we used to believe that if we had a planet and a star with the same properties as the Earth and the Sun – with the same age, with the same orbital distances, sizes and masses, from The same materials – then we would get life again. We also assume that other combinations are less likely. But all our assumptions may be incorrect. Earth can be as rare as life. 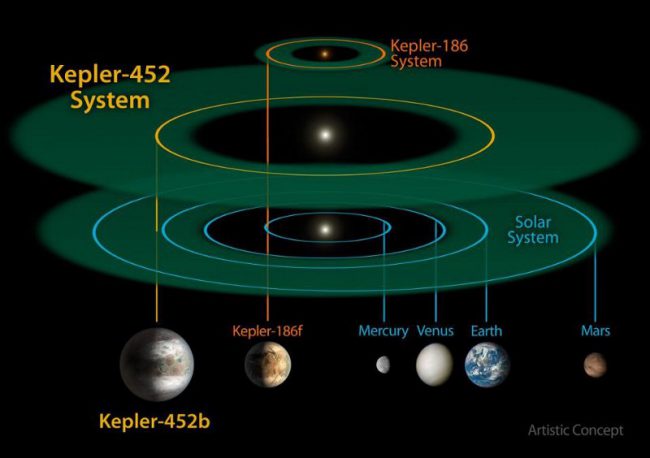 – Her native star is very similar to the Sun in terms of temperature, mass and size: it’s a G2 star, about the same brightness and overall lifespan.

– It rotates practically at the same distance and approximately the same period as our planet around the Sun: 385 days instead of 365.

– The star around which it rotates is not much more developed than our Sun: over 1.5 billion years old, which means it is 20% more energetically powerful and 10% colder.

– The planet itself is not much larger than our Earth, and its radius is 60% larger.

– And although these conditions may seem to you “earth-like”, the discovered world, of course, has nothing in common with the Earth. 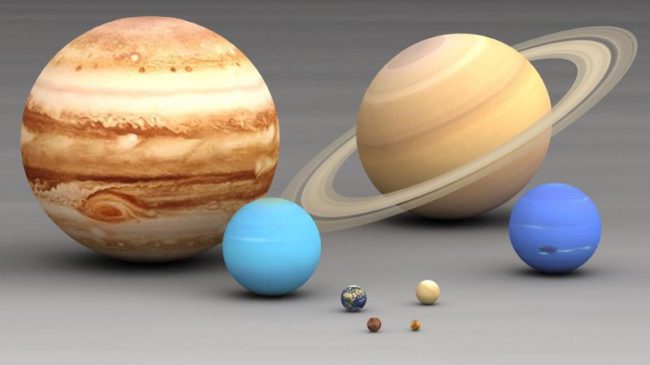 In our solar system, the difference between Earth and Venus is tiny: about 5% in radius. For comparison: the difference between Earth and Uranus or Neptune is huge: these worlds are four times larger than Earth in a radius. Therefore, more than 60% may not seem too exaggerated, but there is a high probability that we will find a solid planet with a thin atmosphere that will have the properties of a gas giant: a large shell of light atmospheric gases. In fact, there is a very narrow window that should be considered an “earth type” according to the size of the planet, and a deviation of more than 10-20% of the earth’s dimension will be too large.

However, there are all reasons to believe that terrestrial-type planets are quite common. The latest results from the Kepler telescope show that the Milky Way disk has at least 17 billion planets the size of the Earth, and at least a few percent of the stars will have at least one earth-like world at their side. Although our ultimate goal is, of course, to find a world with a developed biological life – preferably peace with life during the Cambrian explosion – our thoughts always return to the twin of the Earth. But such a double, even if it exists, may not be the best place to search.

Our Sun is a G-Class star of 4.6 billion years old. Although we think that it is one of the most common, it’s not like this: our star is more massive than 95% of all stars. M-dwarfs, small red stars, represent the most common type of stars in the universe: three quarters of all stars are M-dwarfs. Oceans on our planet will boil in a billion years, but M-stars will burn at a stable temperature of tens of trillions.

Kepler found many terrestrial planets near these M stars, which were located in suitable places for the water to stay on their surface in a liquid state and the mass of which was quite suitable for the earthly definition. Although M-stars are more likely to give out flares, and planets next to them should be closer, they also provide a more stable environment for their planets, with less ultraviolet radiation and increased protection from violent manifestations of interplanetary and interstellar space. Tidal forces from their stars are also stronger, and their reduced orbital periods provide them with a simple way to generate a large magnetic field, possibly protecting from flares. 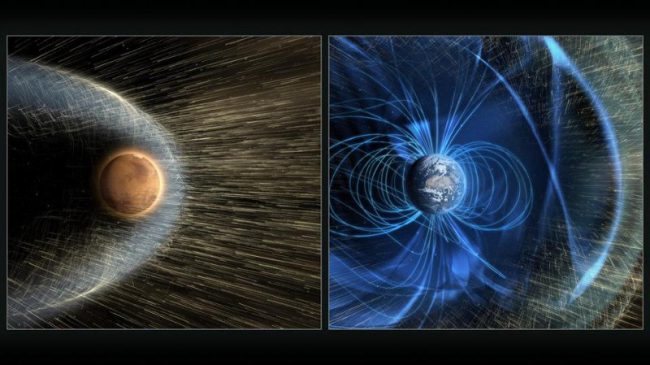 These systems are quite common, and systems with a double of the Earth are not. What do we need for a true “double”? First of all, we need a star like the Sun. This means that the star should not only be of the same temperature and spectral class, but also of approximately the same age. For life to evolve and evolve into something interesting, it takes time, which means that we need a star system that is many billions of years old. But too long we can not wait, because as the stars age, the core region connecting hydrogen with helium grows, and the output power increases (and at the same time brightness and temperature). In the end, the planets (like the Earth), which were once suitable for life, will become too hot, boiling water and not giving life to develop.

Suppose we have a window of 1-2 billion years, which is about 10% of the life of a star. In our galaxy, about 200-400 billion stars, and about 7.6% of them are G-class stars, like our Sun. Despite the fact that our Sun is more accurately classified as a G2V star, it still follows that about 10% of all G-class stars will be of the same type as our Sun. If we take the upper edge, there are 400 billion stars, 7.6% of which are G-class, 10% of which are of the same subclass as the Sun, 10% of which are the right age for an interesting life. It’s 300 million stars. But even then not all of them will have enough heavy elements to create the earthly world. 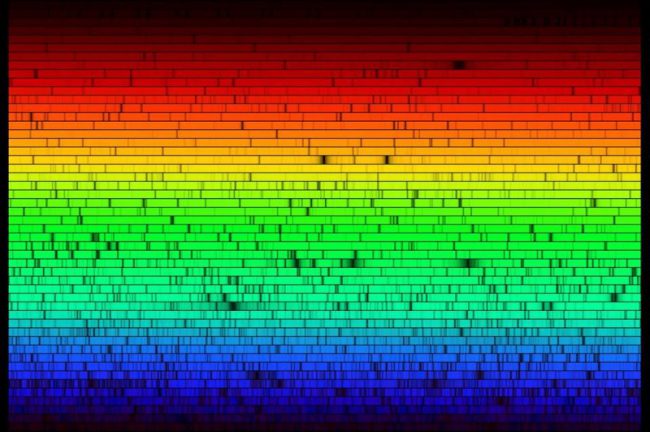 Above you see the spectrum of the Sun. In other words, these lines that you see represent the most diverse atoms and their relationships. They are many on the Sun, and they have very specific relationships. The indicator of what is not hydrogen or helium, but synthesizes materials on the Sun, astronomers call metallicity. If we want a terrestrial-type planet, we need stars with metallicity of a solar type. It’s not so bad; Up to 25% of the stars that formed at the same time as our Sun were intermediate stars of the I population, and many of them (perhaps about 15%) have the same metallicity as our Sun.

It turns out that in our galaxy there are 11 million stars like ours, with the same index of heavy elements. How many of these 11 million solar “twins” have their terrestrial twins in the inhabited zones?

We need to form a solid planet of suitable size with a sufficient supply of elements, the right amount of water and in the right place so that it can be considered the twin of the Earth. All these problems are interrelated. One might think that if the central star has the correct content of elements, then the emerging planets should have the same density-to-radius ratio as in our solar system. But if your planet has a 20% more radius than the Earth, you will probably get an envelope of light gases – hydrogen and helium – that will cover your planet, even if you are in the inner part of the solar system.

The world, which is 60% larger than the Earth, will be more than five times its mass, and this is too much to be a hard planet with a subtle atmosphere. If we again scroll through all the estimates, we will get from forty to hundreds of thousands of terrestrial-type planets with earth-type orbits near solar-type stars. At 400 billion stars, the odds will be extremely narrow.

And remember that the real purpose of searching for such planets is to search for worlds that can support life on earth. And if the goal is exactly this, do not look for the “double” of the Earth; It is better to look for smaller planets near the M-class stars. It is better to search for worlds of terrestrial type in potentially inhabited zones near the stars. There will be many more such options.