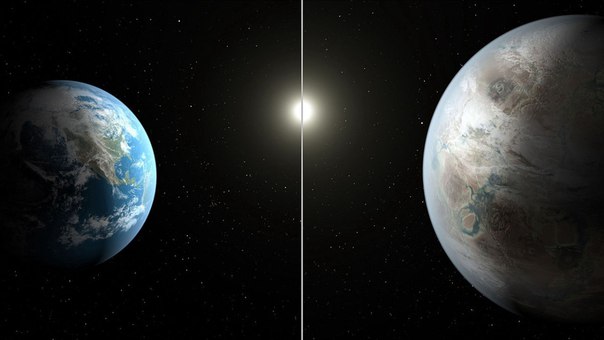 If you were just 25 years ago, astronomers and astrophysicists have asked whether there is around other stars of the planet, the answer would be “perhaps, but we’re not sure.” Due to a number of new methods and advanced equipment, we now have thousands of stars in our own galaxy, which has its own solar system.

Found planets of all sizes and masses, orbiting at various distances; found a planet larger than Jupiter, orbiting the star in less than 48 hours; found solar system with five planets, where we have a void between Mercury and the sun. Near these stars are also found more than 200 planets Earth-size and 21 hard world in a potentially habitable zone. And these numbers are growing.

Almost all of this information has been received for the mission NASA «Kepler”, the telescope was a major tool to search for exoplanets. The other day there was a transit of Mercury – the closest planet to the Sun took place in front of the disc of the sun, briefly blocking its light. At the beginning of the brightness of a star transit fell, and when the planet passed, grew again. After a short dimming the brightness of stars, even the tiniest, is precisely the method that allows you to “Kepler” to find planets around other stars. When the planetary system perfectly aligned with the star relative to our line of sight, we can observe and record the transit of the worlds around other stars.

Spacecraft “Kepler” watching site containing about 150 000 stars, for four years, and found more than 2000 planets and another 1,000 “probable planets”, which are still awaiting confirmation. But this does not mean that only 1-2% of these stars have planets; the likelihood of a good planetary alignment in our line of sight is very small, and in addition, we can only detect planets with orbital periods that are less than the observation time, “Kepler”.

When we compare what we see, so expect to see, where do not see, we obtain the following interesting things:

About 80% of stellar systems have planets. The vast majority of planets is three times the size of Earth or less, but not gas giants. In our galaxy alone should be about 60 billion solid planets in the habitable zone.

But there is a big difference between a potentially habitable planet, as we used to say – solid planet at the right distance from its star, atmospheric conditions close to the Earth, with liquid water on the surface – and the planet, which can be home to people: this Earth 2.0 . Because we need a little bit more. Yes, we need a solid planet in the habitable zone, but also the following:

The planet is not just with the ingredients for life (and stones), but the planet where life really rastsvela.I that no disaster has not prevented it to develop into a complex, diverse, multicellular life. It was then, perhaps a little adapting, we could live and thrive on the surface.

If we are very, very lucky, we’ll get something else: a kind of complex life may well become a technologically advanced civilization, such as that which we are trying to become. How likely is it that the galaxy is another planet on which all this happened? Or, in the entire universe? We do not know yet. But we can assume something.

According to researchers Frank Adam and Woody Sullivan, if humanity is not uncommon for the universe, the probability of accomplishment of these three big steps – there is life in the world, life develops in complex organisms, one of them becomes the technologically advanced – should be not less than 2.5 x 10-22. If we are not rare in the galaxy, it should be at least 1.7 x 10-11. It can be much higher, especially if we exclude the requirement of high-tech civilization.

The ingredients for life are everywhere you look, whether it’s molecular clouds in interstellar space, the subsoil asteroids or frozen worlds in the Kuiper belt. Our own solar system may have life in subsurface oceans of Europe and Enceladus, in the upper clouds of Venus, under the surface of Mars, or even in the world with a completely different chemistry, such as Titan. Even if the chance of development of life will be a million to one, in the Milky Way will be tens of thousands of worlds. And the closest Earth 2.0 can be only 1,000 light-years away. Well, maybe it’s time to find it?