Is there life in the Alpha Centauri system? 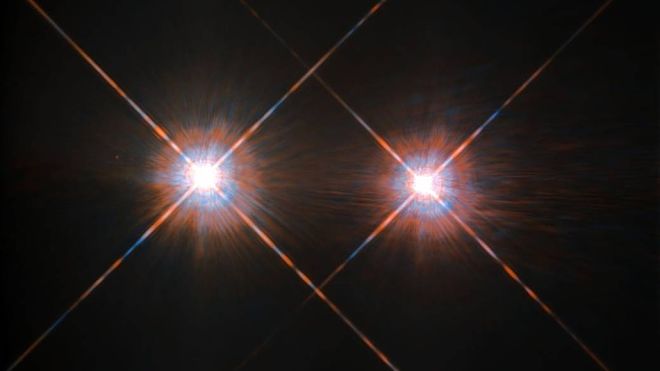 It seems that our closest stellar neighbor may not be as unfavorable to life as previously thought.

NASA’s “Chandra” space telescope found that planets revolving around the star system of Alpha Centauri, which is located just 4 light-years from Earth, have a better chance of supporting life than scientists assumed.

Researchers have always believed that Alpha Centauri is the system that has the highest chances of being inhabited outside the solar system. But strong X-ray radiation, emanating from three stars, reduces the likelihood of life on the planets of the system almost to zero.

However, the data obtained by the Chandra telescope suggest that things are different. Two stars of the system called Alpha Centauri A and Alpha Centauri B emit x-rays in the same volume as our Sun.

“This is very good news for Alpha Centauri AB regarding the possibility of life on planets that revolve around these stars,” says astrophysicist Tom Ayres. – “Chandra” shows us that life there can have a chance to win. ”

Nevertheless, at the moment it is nothing more than a hypothesis. Scientists have yet to find the planets revolving around AB. It is also important to learn about the conditions around these stars.

Observing the emission of X-ray radiation is one of the most important aspects of determining whether a star system can support life. Therefore, since 2005, “Chandra” is closely monitoring the two main stars of Alpha Centauri.

Since the orbits A and B are close to each other, scientists believed that the radiation from the stars is so strong that it would destroy the integrity of any planetary atmosphere that could support life.

But since the X-ray radiation of the system is weaker than expected, this means that there is a hope for life. The third star of Alpha Centauri, known as Alpha Centauri C, or Proxima, is most likely lifeless. Proxima is a red dwarf, known for producing a huge amount of x-ray radiation – 50,000 times more than we get on Earth.

So far, NASA has discovered only one planet about the size of Earth, which revolves around Proxima, but the search continues.