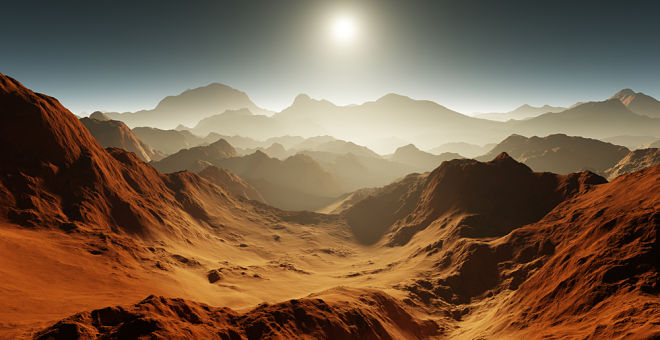 More than any other planet in the solar system, Mars always inspired suspicions that once upon a time there existed and, perhaps, still exists life – at least microbes.

NASA’s last statement that living beings could be inhabiting the Red Planet was not shocking, but it provided a new food for adherents of theories about the inhabited Mars.

The data was obtained thanks to “Curiosity”, a $ 2.5 billion spacecraft that landed on Mars in 2012. In 2013 he discovered organic molecules in Martian soil; in 2014, methane gas in the atmosphere.

Now, the tools of “Curiosity” have discovered two more phenomena: mysterious seasonal ups and downs of methane levels on the planet and the existence of new organic molecules, this time in a rock of billions of years old. 95% of methane on Earth produces plants and animals – for example, rotting vegetation and the release of intestinal gases from animals. Organic molecules are the basis of all life on Earth. Therefore, it is very tempting to come to the conclusion that NASA has found evidence of life on Mars.

But methane and organic molecules can have a non-living origin, and this was quickly pointed out by scientists at NASA’s press conference. Methane gas and organic molecules are produced in the course of everyday geological and chemical processes. Therefore, new discoveries leave us no nearer and no further from answering the question: is there ever life on Mars?
In 1877, this seductive opportunity was seriously considered by Giovanni Schiaparelli, an Italian astronomer who stated that he had seen channels on the surface of the planet. In 1894, American astronomer Percival Lowell published drawings of these channels, which, in his opinion, the Martians built to conduct water from the poles to the equator.

The fantastic hypothesis of Lowell inspired Herbert Wells to write the “War of the Worlds”, a novel about the Martians who captured the Earth. Now we understand, however, that the channels were an optical illusion, which gave rise to wishful thinking.

Marsomania did not end there. In 1996, NASA scientists announced that they had found evidence of fossilized microbes in a meteorite from Mars. A stone named Allan Hills 84001 in honor of a place in Antarctica, where it was found, made a lot of noise in the media.

Today, many scientists doubt the validity of Allan Hills 84001. Most likely, the cobblestone was taken as evidence of the existence of life on Mars because of our stubborn fantasies.

How will history judge the last statement of NASA? Wait for the discoveries that will soon be forthcoming from new NASA researchers, such as NASA’s Mars 2020 rover and the European Space Agency’s ExoMars rover.
At the same time, the latest discoveries of “Kyuriosity” confirm that Mars was once a warm and humid place where, perhaps, life existed. Today, for unknown reasons, the planet is cold, dry and lifeless.

NASA’s statement reminds us that the warmth of the Earth is a cosmic blessing, one of the most important conditions that allows people to live and survive.