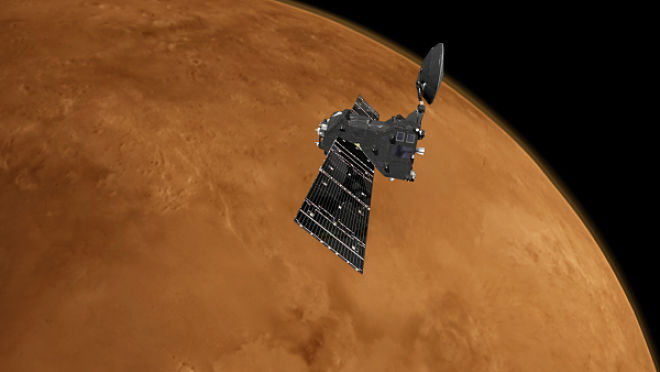 In the coming months, scientists hope to determine the origin of methane found in the atmosphere of the Red Planet. On Earth, this gas is mainly produced by microbes, although it can also be formed as a result of underground geological processes.

Spacecraft “Trace Gus Orbiter”, created under the program “Exomars”, is designed to study the sources of gases in the atmosphere of the Red Planet. Last week, with his help, the first measurements were made.

“If we find traces of methane mixed with more complex organic molecules, this will be a clear indication that methane on Mars has a biological source and is produced or once produced by living organisms,” said Mark McCohrin, senior advisor for science and research in the European Space Agency.

“However, if we find that it mixes with gases, such as sulfur dioxide, this will mean that its source is geological rather than biological. In addition, methane, which is of biological origin, usually contains lighter isotopes of elemental carbon than methane, which is produced geologically. ”

Now “Trace Gas Orbiter” circles around Mars at an altitude of about 400 km from the surface. A few days ago, engineers sent his instruments to the planet and began to take measurements. Scientists expect that it will take more than a year to complete a complete review of the methane hot spots of the planet, but they hope that in a month or two they will already have an idea of ​​the source of the gas.

If they find that methane is biological in origin, two scenarios will be considered: either methane seeps to the surface from microbes that died out millions of years ago, or some very stable methane-producing organisms still live beneath the surface of the planet.

If the gas source turns out to be geological, the discovery can still be important. On Earth, methane is produced as a result of a geological process known as serpentinization, when olivine, a mineral present on Mars, reacts with water. Considering that water is crucial for the forms of life known to us, its availability will substantially increase the chances of finding living organisms on Mars.