Is there life under the ice of Europe – the satellite of Jupiter? 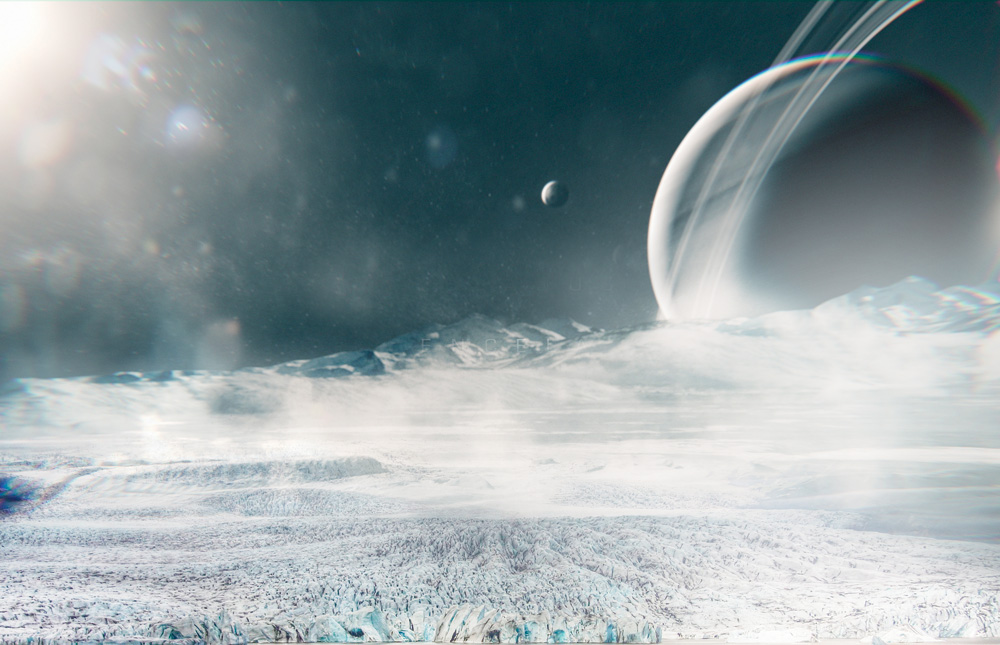 There is such an occupation – a mental experiment, useful in science and in life. Let’s experiment with the ability of intelligent beings to know the world, being in a terribly inconvenient place for this. Let’s try to mentally move to Europe – the fourth largest of the satellites of Jupiter. We will go down under its many kilometers of bark, into the subglacial ocean. To understand the world, you can not imagine a worse place, because “the sky” here is really a solid, and practically impenetrable. Nevertheless, the water in Europe warms up the tidal friction that arises from the attraction of a huge close planet. But if there is liquid water, then why not be the one who floats in it?

Let the civilization of Europe be born and develop under the icy armor of the satellite. They live in darkness, where a significant source of light can be perhaps bioluminescence, and for orientation use echolocation, which is effective only at a limited distance. But could the Europeans guess that they live on a round body? What with ice extends an endless space, what is Jupiter and the Sun? We will consider how their cosmology could develop – and at the same time we will better analyze some concepts and principles of scientific knowledge. 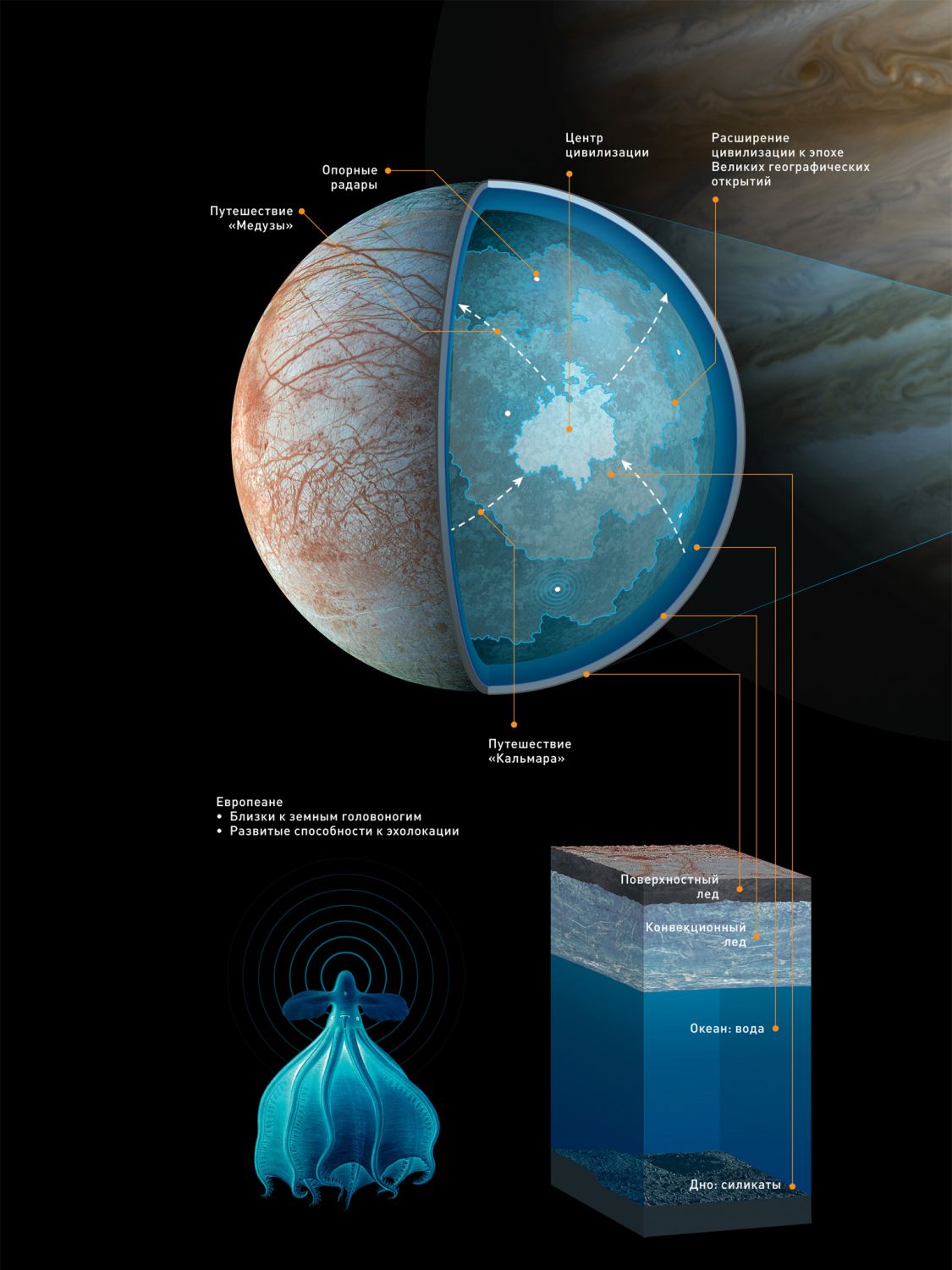 How the Europeans realized that the world is round

Living in the darkness, the inhabitants of the subglacial ocean have always experienced problems with long-range navigation. The lack of basic reference points – stars and the Sun – strongly delayed the era of the Great Geographic Discoveries, while the Europeans did not guess to establish chains of acoustic beacons. Orienting on their reference signals, the travelers moved the boundaries of the “civilized world” far, opening underwater volcanoes and wild tribes, mapping new mountain ranges and fertile volcanic calderas … Finally, the famous expeditions of the Kalmar and Medusa ships were prepared and equipped, Which went in perpendicular directions – to the hypothetical edges of the World. Time passed, but expeditions sank like into the ocean.

Finally, from the “Medusa” came an emergency message, coded by a series of powerful hydraulic shocks: she crossed the chain of lighthouses left by the “Squid”. Their perpendicular routes could not cross, therefore the Europeans considered that this party was finally lost, and they were already ready to mourn the fate of the pioneers, after a long silence in the “center” they heard the usual acoustic signals of the expeditions, and soon the ships appeared themselves, whole and almost unscathed , But returned to the starting point from opposite sides. Having conferred, scientists decided that they simply lost their way because of inaccuracies in the installation of lighthouses and, having described the circles, returned to the beginning.

To find out the reasons for the navigational error, a commission was set up, which prepared such a voluminous and confusing report that no one tried to understand it. While one engineer did not come up with a navigation gyroscope – a tool that can play the role of a compass and test everything in an experiment. The creation of a bulky device was financed by the association of shipowners, who had long dreamed of getting rid of duties for using acoustic beacons, and the work began to boil. But at the first start of the gyro, the engineers discovered a strange effect: the axis of the device did not hold the direction, it turned slowly, describing the cone – as if contrary to the law of conservation of the rotational moment.

Attempts to correct the annoying mistake did not help, and the engineers turned to a well-known expert in the field of theoretical mechanics. And then came the moment of truth: both facts – and the strangeness of the journey of the Medusa with the Squid, and the precession of the gyro axis – formed in the head of the scientist together. They were easily explained by one, albeit incredible fact: The world is a rotating sphere, and precession indicates the period and the axis of its rotation. 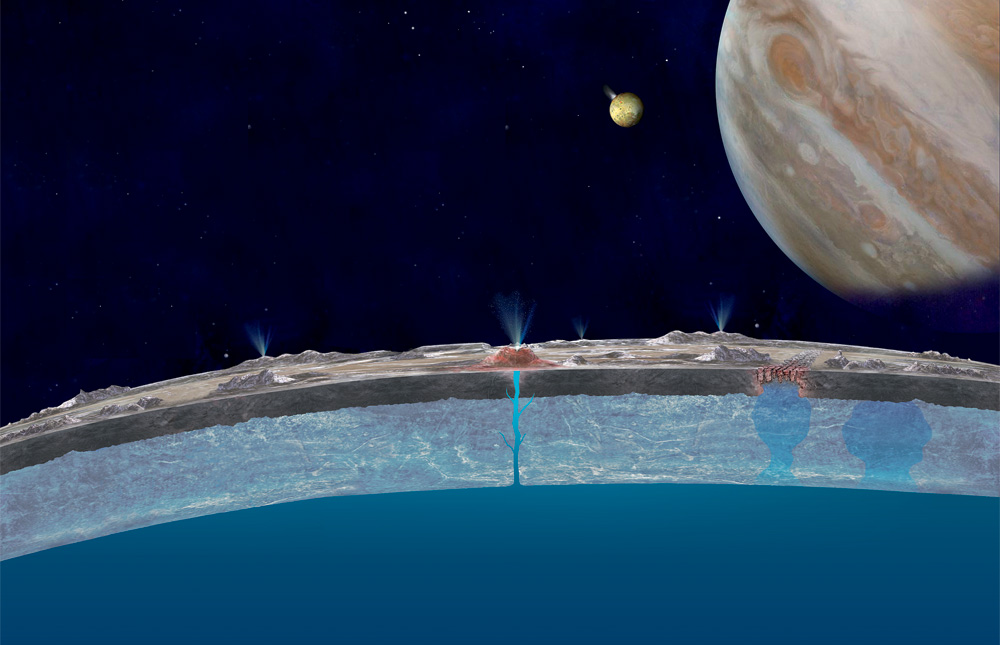 According to some reports, powerful geysers are beating through the cracks in Europe’s crust. Someday these faults will serve as a “gateway” through which the Europeans look out into space.

How the Europeans learned about Jupiter and the Sun.

Recall that for the inhabitants of the great Ocean echolocation is the main source of data about the surrounding world. In it, the Europeans achieved great skill, having learned to accurately measure the height of the ice shell above themselves. During the large research project “Heavenly Breath” it was shown that the ice periodically rises and falls. Moreover, the amplitude of these oscillations is different, it is maximum in certain – opposite to each other – points of the Ocean, and the period exactly coincides with the period of precession of gyroscopes.

Here is how the European physicist, the head of “Heavenly Breath” explained these effects: “Imagine that my head is directed along the axis of rotation of the World, and I stretch my arms in the plane of the equator. I am our round Ocean and revolve around the Big Attractor, remaining turned to him always with one side, face. The attractor is heavy, it is he who pulls me towards his own gravity. My orbit is not circular: here I approach the Attractor, and it pulls me harder, but here I move away and become more round. “… Europeans discovered Jupiter without even seeing it.

The thickness of the ice shell of Europe is measured in kilometers, and possibly tens of kilometers. Only an insignificant amount of light can penetrate through such a shell, and further development of the European cosmology required the development of perfect photomultipliers. Familiar to local scientists bioluminescence, the desire to “strengthen” and use this phenomenon of nature could well lead to the development of optical technologies and the appearance of sufficiently sensitive instruments. Mounted on the inside of the ice shield, they allowed for long observations and sufficient data to isolate a periodic signal from the mass of noise and detect a light source rotating far beyond their World.

European scientists were surprised to find that the period of this signal lags behind the set time of “gyroscopic days” by a small, but constant value – 1/1220. In other words, the movement of the radiation source lags one revolution in 1220 days in Europe. This can only be explained by the fact that somewhere far away around the Great Attractor a separate unknown source of light rotates, or the Great Attractor itself revolves around a monstrously distant and massive luminary. “Judging by the fact that the External Source is not affected by the rotation of our World around the Attractor, it is very, very far away,” said the project manager. “But it’s also very bright, brighter than anything we can imagine.” One has to think that the mass is huge – and, apparently, it is we with the attractor that rotate around him, and not vice versa. ”

How the Europeans figured out about the neighboring worlds

The next breakthrough of the European astronomy is connected with another great scientific experiment, the Second Breath project, which used sensors of new generations. By attaching acoustic beacons to the ice “sky” of their Ocean, local scientists measured the horizontal and vertical movements of ice with inaccessible accuracy and decomposed them into periodic harmonics. The daily fluctuations were understandable: they are associated with the deviations of the axis of rotation of the World when moving around the attractor. Their value allowed to calculate the eccentricity, the elongation of the orbit, and the difference between the force of deformation of the ice in the near and far from the attractor points indicated its mass and distance to it.

However, in addition to daily tides, other harmonics were also found in ice movements, for example, about half the duration of “gyroscopic days”. It was possible to explain them only by the fact that the attraction of something third acts on the ice cortex. “And this is something – the historical speech on which the find was sounded, was preserved in numerous records and memoirs – it is something – another World, a double of ours, moving around the Big Attractor in an orbit of a smaller radius, with a period of exactly one half day.” Similar harmonics pointed to other “small attractors” – as the Europeans discovered Io, Ganymede and Callisto.

According to some reports, powerful geysers are beating through the cracks in Europe’s crust. Someday these faults will serve as a “gateway” through which the Europeans look out into space.

Instead of an afterword

Even Europeans – creatures almost unable to see anything beyond their ice shell – have learned a lot about the surrounding space. We earthlings can look much further, and the existence of four large moons of Jupiter far from us was discovered by Galileo. But there are areas closed and