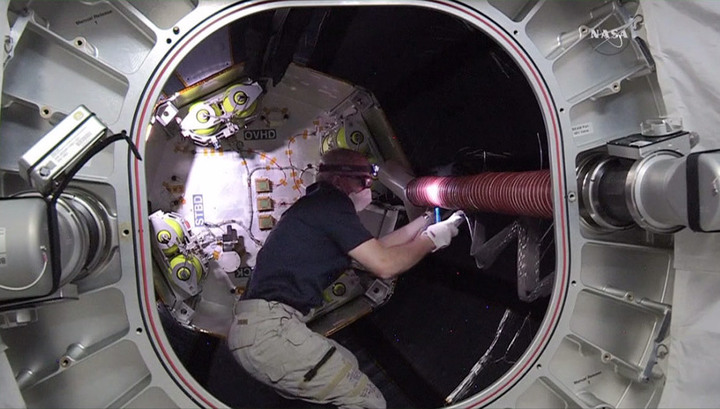 The astronauts took samples of the air and began collecting data about how the BEAM worked during deployment. Williams informed the dispatchers of the mission control Center in Houston that the module is “in perfect condition”, it is clean and cold. However, traces of condensation on the inner surface is not detected, said NASA.

On 7 and 8 June the scheduled additional work to establish the duct, a variety of sensors and equipment. All flight engineers will come to BEAM six or seven times a year. Hatch module to close after every entrance.

Initially, the entry of the astronauts into the module was scheduled for June 2, but due to the delay in deploying the terms had to be revised.

Recall that a compact BEAM module, developed by Bigelow in conjunction with NASA, has a mass of 1360 kg and is a hollow chamber with a volume of 3.6 cubic meter, which, when pumping air is inflated in four-and-a-half times – up to 16 cubic meters.

The module was delivered to the ISS by cargo ship SpaceX Dragon on April 16, 2016.

In the next two years, the ISS crew will test the module, checking whether it’s suitable for life, secure an inflatable design protects astronauts from solar radiation, extreme temperatures and debris. At the end of the probationary period, the module will disconnect from the station, and he completely burned in the dense layers of the atmosphere.

Assuming that all tests pass successfully, in the future, such modules will be used in space flights, including the upcoming Mars mission.