It became known how the mysterious ice “skyscrapers” arose on Pluto 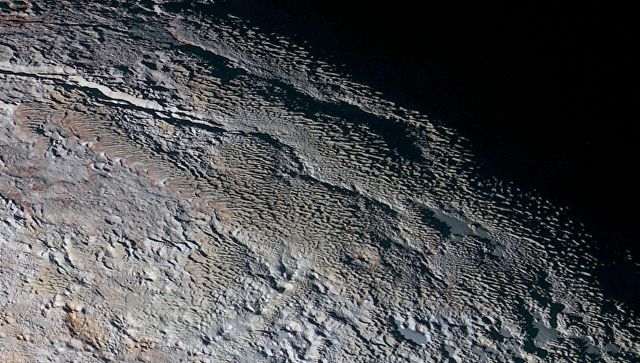 Unusual ice skyscrapers on the surface of Pluto, sawtooth structures with a height of 3-5 kilometers, are traces of the last “ice age” on a dwarf planet.

“When we realized that these” skyscrapers “consisted almost entirely of methane ice, we wondered why it was turning into such” acicular “structures, rather than simply accumulating in the form of frozen blocks? It turned out that there are variations of climate on Pluto, and when the planet warms up, the ice begins to simply evaporate into the air, “says Jeffrey Moore of NASA’s Ames Research Center (USA).

The main object of the public’s attention during the passage of the New Horizons probe past Pluto was its bright and well-marked heart – the Sputnik plain and the Tombo region, named after the pioneer of this dwarf planet. Next to it is another region that attracts the attention of scientists no less than the “heart” – the so-called Tartar ridge, filled with strange mountain peaks.

In their shape, if you look closely at the three-dimensional structure of these peaks, they resemble a kind of “saw” or a set of swords or skyscrapers a few hundred meters high, stretched toward the south and north, and 3-5 kilometers distant from each other. These space “needles” are located on top of even larger formations of this kind, analogues of which, according to scientists, in the solar system there.

Initially, the scientists had two hypotheses, how could these “skyscrapers” arise-they could have appeared either as a result of the evaporation and condensation of methane ice, or the accumulation of clathrates-the connections of methane and water-on the surface of Pluto.

Moore and his colleagues studied the three-dimensional images taken by the MVIC camera at the time of approaching Pluto and realized that these “needles” had appeared in much the same way as the so-called “repenting snow”, mysterious ice structures in the Atacama Desert and other highland areas regions of Latin America, discovered by Charles Darwin in 1839.

They are fields of many ice pillars and snow pyramids that arise in dry high-altitude areas in those times when the sun shines particularly strongly. In those cases when the sun illuminates ice or snow at a large angle, as a result of which some areas receive more light and heat, while others – a little less. As a result, the ice begins to evaporate in the “light” areas, “and in the” dark “- remains untouched.

Something similar, as NASA’s planetologists say, happened on Pluto. In the distant past, its climate was colder than today, thanks to which methane, existing today in the atmosphere of a dwarf planet in the form of gas, began to condense and turn into ice not only in the lowlands, but also on the mountain tops.

Subsequently, the climate became warmer, and the methane ice began to gradually evaporate, forming such needle structures that grew to 3-5 kilometers for millions of years after the end of the “ice age”. This, according to researchers, indicates that the climate of Pluto is much more changeable and dynamic than previously thought.