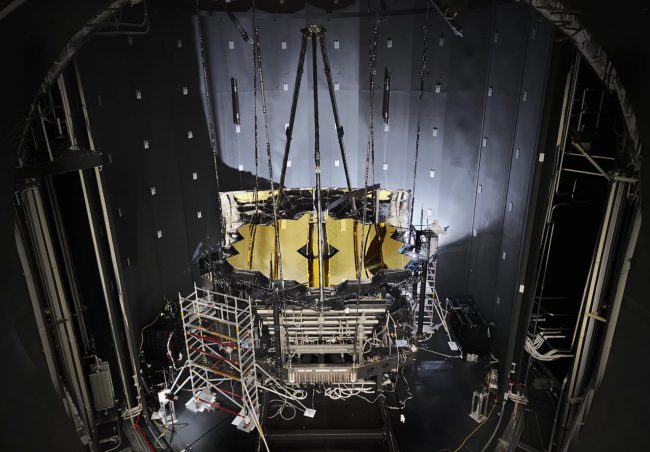 At the Johnson Space Center (Texas, USA), cryogenic tests of the James Webb telescope were completed. For 90 days the device was in a closed vacuum cryogenic chamber with a constant temperature of -233 degrees Celsius. The cooling in the chamber was maintained by two circuits: the outer was filled with liquid nitrogen and the internal one was filled with liquid helium.

The telescope James Webb is often called the successor to the Hubble Space Telescope. Both devices have similar tasks, and both operate in the same frequency range. However, “James Webb” much (more than 6 times) larger than the old man “Hubble”. It is so large that its main mirror consists of 18 separate segments that will need to be decomposed as soon as the telescope reaches its destination and observation – Lagrangian points L2 of the Sun-Earth system more than 1 million kilometers from the Earth.

Tests in a vacuum chamber require careful preparation. Matter, while being under low pressure inside the chamber, can evaporate and settle on the cooled surfaces of the telescope, which can damage its components. Therefore, before the start of testing in a cryogenic chamber, NASA engineers had to literally clean it from every speck of dust. When the camera was finally prepared, a telescope was placed in it and the slow cooling of the device began, lasting for a whole month.

“After 15 years of testing planning, re-equipment of the cryogenic chamber, hundreds of hours of tests designed to reduce the possibility of equipment breakdown, as a result of efforts of more than a hundred specialists who worked for 90 days, the tests in the cryogenic chamber were successfully completed,” said the project manager for the creation of the orbital telescope Bill Oh.

The test was not hampered even by the hurricane “Harvey” that hit Texas in August this year and caused quite serious damage in Houston, where the Johnson Space Center is located.

Now the telescope is transported to the Northrop Grumman Aerospace Systems test stand in Rodeo Beach, California, where it will be docked with the engine compartment. After this, the whole design is subjected to a new series of tests for vibration and overload.

Recall that the withdrawal of the telescope “James Webb” into orbit will be carried out in 2019 with the help of an Ariane 5 launch vehicle from the Kourou cosmodrome in French Guiana. Within six months of launching, all of its on-board equipment will be carefully checked, after which it will be able to begin fulfilling its main mission – observing the oldest stars and galaxies in the universe. The estimated period of operation of the telescope is 10 years.