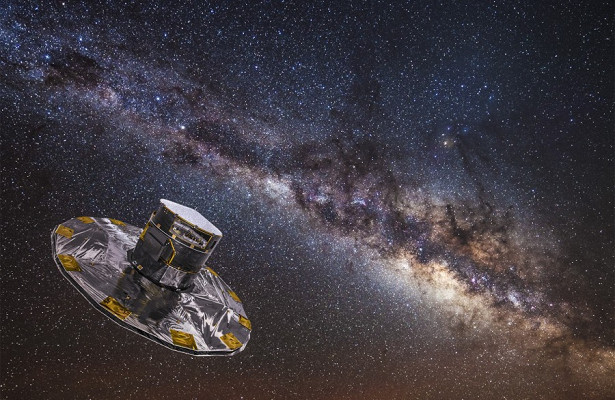 Astrophysics from MIPT, P. Lebedev Physical Institute of RAS and NASA found an error in determining the coordinates of the centers of active galactic nuclei with a Gaia telescope and helped correct it. In parallel, scientists have received independent confirmation of the astrophysical model of these objects. The article was published in The Astrophysical Journal.

The accuracy of the coordinates obtained on Earth by optical telescopes is significantly limited. In 2013, a Gaia satellite telescope was launched into Earth’s orbit, capable of capturing optical signals from relatively distant sources and reconstructing coordinates with greater accuracy than is possible from Earth.

Before Gaia, the most accurate coordinates were obtained using special systems of radio telescopes. Such telescopes are able to catch a low-frequency (radio) signal with a decent resolution. This allows you to get the image in detail, but the accuracy of measuring the location of objects in space is somewhat inferior to the accuracy of Gaia. However, as the authors of the article discovered, the satellite cannot be trusted without any conditions. Comparison of the data of both methods showed that Gaia, for all its accuracy, makes a systematic error in astrometry of a whole class of space objects – active galactic nuclei. To obtain the most reliable map of the sky, satellite needs support from the Earth, and radio data helps to correct the coordinates.

The active core of the galaxy is a small and very bright area in its center. The emission spectrum of nuclei is different from the stellar one, so the question arises about the nature of the radiating object inside the nucleus. It is believed that inside the nucleus there is a black hole, the suction substance of the host galaxy. In addition to the galaxy disk itself, the bright core and the dust cloud around, a powerful ejection of matter — a jet — can be present in such a system. By the nature of the jet, the active galactic nuclei are divided into subclasses – quasars, blazars, and others.

“We assumed that the influence of the jet could introduce a systematic error in the measurement of the coordinates of the active galactic nuclei in Gaia. This assumption was confirmed – it turned out that a regularity is observed for objects with sufficiently long jets: Gaia sees the source much further in the direction of the jet than the radio telescope, ”says Yuri Kovalev, author of the article, head of the laboratories at the Moscow Institute of Physics and Technology.

Such an error cannot be explained by chance: a significant shift was observed with statistical significance only for objects with the longest tails and not in a random direction, but in a dedicated one that coincides with the direction of release. We are talking about active nuclei, whose ejection length is orders of magnitude larger than the size of the galaxy itself. In this case, the shifts were of the order of the jet length.

Since last year, Gaia has also provided information on the visible “colors” of galaxies. This helped the authors to separate the contribution of different parts of the galaxy to optical radiation and the measured coordinates: the source, the disk itself, the jet, the stars. It turned out that the main reason for the shift of coordinates is long jets and small accretion disks. At the same time, the emission of stars in the galaxy has practically no effect on the measurement accuracy.

All this made it possible to say that the astrophysical effects associated with long jets are capable of confusing the Gaia optical telescope. This means that it cannot be considered as a fully independent source of data for determining the coordinates of quasars. But to get an accurate value, you can combine data from the satellite and from the terrestrial radio telescope.