Juno has prepared for the third flight of Jupiter 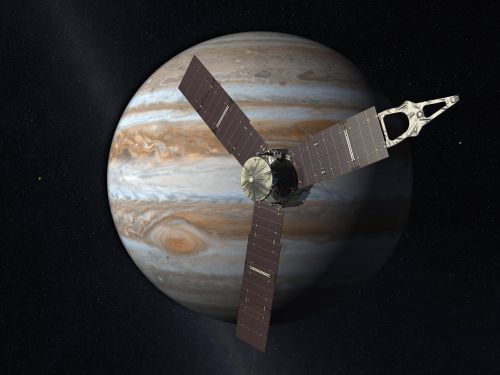 The interplanetary station “Juno” will begin on December 11 the third flight of Jupiter with switching on of seven of eight scientific tools. About it it is reported on the website of NASA.

The beginning of a flight is planned at 9:04 Moscow time. According to the plan, with Jupiter (periioviya) Juno will be in a point of the greatest convergence at the height of 4150 kilometers over the surface of the planet — it is 30 kilometers less, than earlier. Flying speed of the station in a periioviya will make 57,8 kilometers per second. During a flight almost all tools of the device will be involved.

Inactivated there will be a camera of Juno of Jovian Infrared Auroral Mapper (JIRAM). At this time the command of a mission will be engaged in up-dating of the software of the instrument. The station will be able to receive with its help new pictures in case of the following flight which periioviya, as expected, will be reached on February 2. Transition to a short orbit at the same time is postponed until the second half of 2017.

The maneuvre on transition of the device to a 14-day scientific orbit was planned to be made in case of the second flight of Jupiter which came to the end on October 19. For this purpose Juno was transferred to the safe mode, and all instruments are switched off. However during tests before start of the engine failure of helium valves of the station was found. For the period of diagnostics it will remain in a 53,4-day orbit.

The interplanetary station “Juno” was launched to Jupiter in August, 2011. In May of this year the device — it works at solar batteries — reached the gas giant and in July transferred to the drawn-out orbit. The first detail pictures of the planet were made by Juno at the height of 4200 kilometers. The project objective declared a study of structure, the atmosphere and magnetosphere of Jupiter.