“Juno” is coming to Jupiter 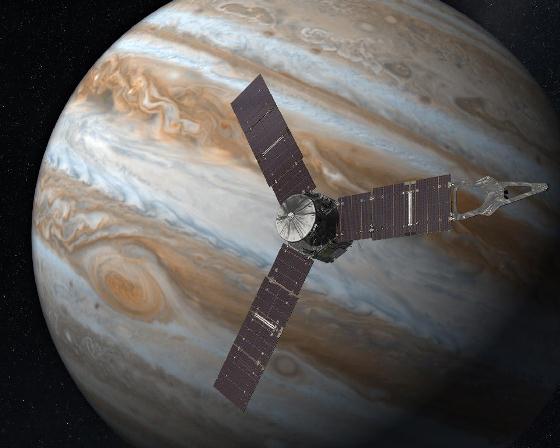 After five years of traveling through space apparatus “Juno” stuck in the orbit of the largest planet in the Solar system. The probe will turn around Jupiter 37 times, trying to avoid the most intense radiation, and then dives into the planet’s atmosphere.

The Amateur astronomer has published a video that shows the approach to the giant planet through the eyes of “Juno”. Jupiter, the fifth planet from the Sun and the most massive planet of the Solar system gas giant — a ball of hydrogen and helium. Scientists do not know exactly what is in the center of the planet and formed if Jupiter in its current orbit or migrated from another place in the Solar system.

Among other mysteries: how Jupiter water, whether it is hard – and why the Northern and southern lights on Jupiter, the brightest in the Solar system. Remains a mystery, and the Great Red spot. Recent observations of the space telescope “Hubble” showed that centuries-old monster storm in the atmosphere of Jupiter is shrinking. The spacecraft will finish the mission in 2018, “jumping sign” in the atmosphere of Jupiter.

Information about the origin of the planet, help to understand the evolution of Earth and the Solar system as a whole. “Juno”, named after the wife of the Roman God Jupiter, the second mission, which is studying a gas planet. The first of the Jupiter mission Galileo was launched in 1989. Then the machine finds evidence of an ocean beneath the icy surface of Europa, moon of Jupiter.