Juno took a snapshot of a Jovian storm 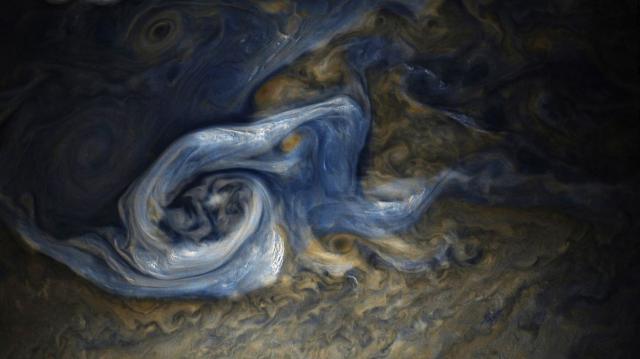 NASA Juno received a storm image in the northern hemisphere of Jupiter during its ninth rendezvous with a gas giant.

The picture was taken on October 24 this year. At the time of shooting the device was at a distance of 10 thousand km from the upper clouds of Jupiter. The storm is visible in the region of 41.84 degrees north latitude of Jupiter.

The scale of the image is 6.7 km per pixel. The vortex rotates counterclockwise. The darker clouds in the image are deeper in the atmosphere than the lighter clouds. Inside the bright sleeves, smaller clouds and groups of clouds are seen.

Some of them cast a shadow on the right side (in the picture light falls on the left). In the frame, bright clouds and their shadows reach 7-12 km. These clouds resemble small clouds in other bright regions that Juno discovered. Probably, they are ascending streams of ammonia ice particles, mixed with water ice.