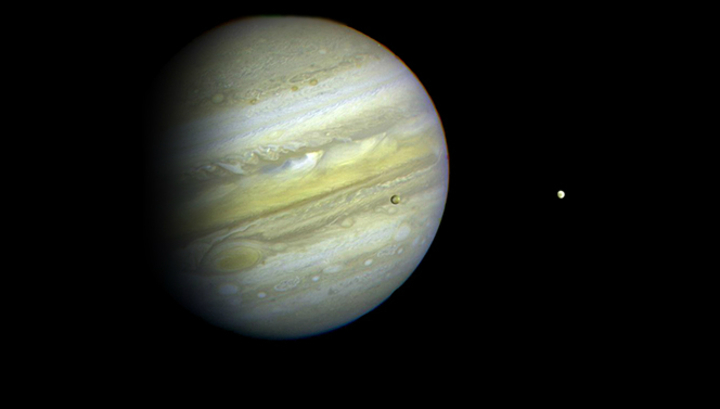 Probe “Yunona (Juno) transmitted to Earth the first pictures taken in orbit of Jupiter. “Juno” is equipped with a camera with high resolution, able to take pictures in the visible spectrum.

The instrument probe responded well to a five-year journey to the largest and oldest planet in the Solar system. A camera that is considered one of the scientific instruments of the probe, began to work July 10. In this day distance from the “Juno” Jupiter was 4.3 million kilometers. NASA released a color photo taken by the device. The picture shows Jupiter and three of its satellites – IO, Ganymede and Europa.

Images that “Juno” was made today, July 13, to reach Earth in a few weeks. “Juno”, which in its journey to Jupiter overcame 2.8 billion kilometers, will run around 37 turns. It will approach the planet to five thousand kilometers, which will allow her to gather information about the structure, atmosphere, magnetosphere of Jupiter.

Among the objectives of the probe – to test the hypothesis that the gas giant has a solid core. Research “Juno” will help to shed light on the processes of formation of the Solar system and the Universe.

Probe “Yunona” began its journey to Jupiter 5 Aug 2011. July 5, 2015, NASA reported that the device has entered the orbit of the giant. After completing all the research and pass the information to Earth, “Juno” will fall to the surface of Jupiter and burn up in the hot gas.