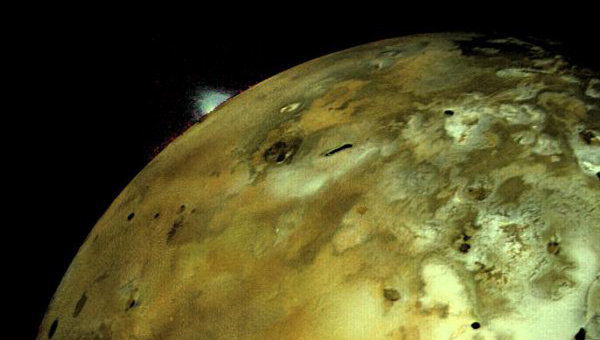 The atmosphere of IO, the hottest and active moon of Jupiter, turns to ice every 42 hours at the moment, when she for two hours in the shade of a giant planet, found astrogeology.

Our discovery shows that the atmosphere of IO is in a constant cycle of collapse and recovery, and reveals that the bulk of the air is sulfur dioxide. Of course, IO’s volcanoes are the main suppliers of gas, however they do not, and the sunlight drives atmospheric pressure at the surface of the planet, melting its ice. We have long suspected that this might happen, ” says John Spencer (John Spencer) from the southwest research Institute in boulder (USA).

IO was discovered by Galileo in 1610 along with three other satellites of Jupiter — Europa, Ganymede and Callisto. This planet is considered a champion of volcanic activity in the Solar System. Ultra-high tectonic activity of IO is due to the fact that her bowels are heated under the action of tidal forces resulting from gravitational interaction of IO, Jupiter and two of its neighbors — Europe and Ganymede.

Spencer and his colleagues found that despite his hot temper, IO still periodically turns into a full cold, albeit for a very short time, watching the concentration of volcanic gases in space around the moons of Jupiter.

IO and most of the other moons of Jupiter and other planets of the Solar system is not able to hold the gas molecules in their atmospheres due to their small size and lack of a magnetic field, so that the air sheath or are extremely sparse, or absent, if they are not replenished from the bowels of the planet.

As previously suggested by scientists, the source of gases in the atmosphere of IO was her volcanoes, emitting huge amounts of sulfur dioxide and other hellish gases during eruptions. As part of these gases should be carried away into space as a result of the Sun’s rays and solar wind, IO should be surrounded by a uniform halo of SO2 molecules.

Actually it is not – the sulfur dioxide is distributed along the orbit of IO is extremely uneven, which speaks of a dramatic change in atmospheric density of the moon, which occur very quickly, within hours or even tens of minutes. Having analyzed its concentration using the TEXES spectrograph installed on the Gemini telescope in Hawaii, American astrogeology came to the conclusion that the amount of SO2 in space are not dependent on the activity of the volcanoes on IO, and on the strength of its radiation of the surface to sunlight and wind.

Sharp fluctuations in the level of sulphur dioxide, according to Spencer and his colleagues say that almost all of the atmosphere of IO, over 80% of its mass is converted into ice at the moment when the planet goes into the shadow of Jupiter, covering her from the Sun and the temperature it drops 20 degrees Kelvin. This occurs every 42 hours, and this Kingdom of ice there for about two hours that IO spends on the back of a giant planet.

Similar processes, as they note, can occur on other moons of Jupiter and the satellites of extrasolar planets-giants. Their presence can both increase and decrease the chances of existence of life on these moons, and further study of this Kingdom of ice and flame, as I hope the geologists will help to understand exactly how these sudden changes in air temperature affect the behavior of the planets and the interplanetary medium.