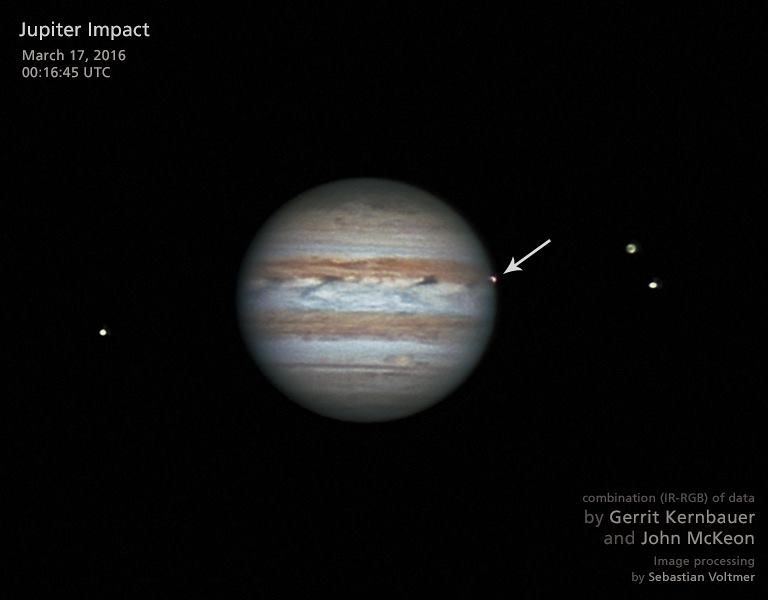 In Jupiter, on average, every year hits 6.5 asteroid that create flare, large enough to be seen from Earth, according to the preliminary results obtained in the framework of the global campaign of observations of the giant planet, which is held among Amateur astronomers. This assessment was voiced at the international seminar on Jupiter for Amateur astronomers and professional scientists, conducted by Europlanet 2020 Research Infrastructure at the Observatory of nice, France.

Meteors hitting the upper atmosphere of Jupiter, can create spectacular flash, similar to that observed by Amateur astronomers Gerrit Kirnbauer and John McKeon 17 March 2016 This outbreak was the fourth in a row in the list flashes on Jupiter, accidentally spotted by Amateur astronomers, beginning with the June 2010 Amateur Astronomers around the world have coordinated their efforts to obtain refined estimates of the quantities of small cosmic bodies located in the vicinity of Jupiter, and the interaction of these bodies with the planet.

However, to obtain estimates of the number of bodies bombarding Jupiter, we need observers that would have recorded not only flash, but the lack of flares – that is, led to the observation continuously. During the three years that have passed since the start of our program, Amateur astronomers from Europe, USA and Australia analysed a total of more than 56 days of video recording or more than 53000 videos – not finding any one flash. These observations allowed us to adjust the estimates previously obtained in the direction of reduction.