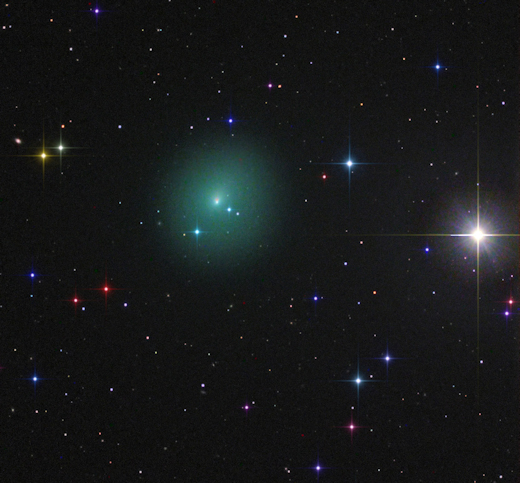 Deep inside, this green sphere is a furiously evaporated wad of dirty ice. The frozen core 46P / Virtanen in diameter is only 1 km, but astronomers call it hyperactive. The cometary nucleus throws out 1.7 × 1028 water molecules per second. Diatomic carbon C2 mixed with water vapor is a gaseous substance that is often found in comet atmospheres and glows green in conditions close to vacuum.

December 16th, this hyperactive comet will fly 11.5 million kilometers to Earth. This is the tenth closest approach of a comet to our planet for the entire space age, which began with the launch of Sputnik in 1957. Comet 46P / Virtanen can be seen with the naked eye for several weeks during the New Year holidays, which is why astronomers dubbed it a comet of the year.

Comet Virtanena passes through the inner region of the solar system every 5.4 years. Right now she is near the Martian orbit and is heading toward us. It is predicted that the comet will become brighter more than 200 times by mid-December and, ultimately, its brightness will reach +3, which is similar to the stars in the Pleiades constellation.