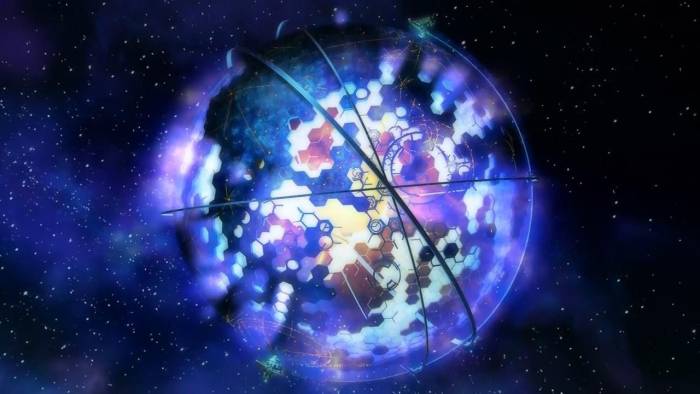 Astronomers succeeded in tracing the last tarnish of the mysterious “alien star KIC 8462852 and measuring its spectrum, the analysis of which, as her pioneer Tabeta Boyadzhian hopes, will help us to understand who is involved in her” blinking “- comets, asteroids, planets or super-developed aliens.

“We spent almost four years without sleep and rest, waiting for the next dulling of KIC 8462852. We were helped by astronomers from all over the world working with the largest telescopes of the world.” Prior to this event, we were not sure that this tarnishing was not a single event, and only Now these fears were dispelled, “says Tabetha Boyajian of Yale University (USA).

The Mystery of Cygnus

In mid-October 2015 and Boydjian, her colleagues described unusual fluctuations in the brightness of the star KIC 8462852 in the constellation Cygnus, which may indicate the presence in its vicinity of the so-called Dyson sphere created by a super-developed civilization of aliens.

Initially, scientists assumed that such a “blinking” of the star could be caused by a swarm of comets that closed its light from observers on Earth, but in January 2016 American astronomer Bradley Schaefer discovered that the brightness of KIC 8462852 inexplicably fell by 0.16 magnitude in the last Century, which cast doubt on this theory.

Initially, a number of skeptics tried to deny the very fact of the tarnishing of KIC 8462852 in the short and long term, but later scientists working with the Kepler telescope, as well as Russian astronomers from the Pulkovo Observatory, confirmed that the brightness of this star was falling in the past. Last week, the brightness of KIC 8462852 started to fall again, falling 2% in a few hours.

As Boyjian says, the first tarnishing of the “alien star” was actually discovered by chance, and therefore astronomers were not ready to observe them and disclose the reasons for what caused KIC 8462852 to sharply reduce brightness. This time, thanks to a specially organized for this campaign on Kickstarter and the help of scientists from all the world’s leading terrestrial and space observatories, the tarnishing of “Tabbi star” has been comprehensively studied.

The tarnishing of KIC 8462852 in May of this year, according to the astronomer, is not accidental and speaks in favor of the fact that these “blinks” are caused by some object in the orbit of the “alien star”, circling around the star in approximately 750-780 days. In favor of this is the fact that other drops in brightness that were recorded by the Kepler telescope during the first phase of his work occurred with approximately the same periodicity, and the brightness of the star during them varied in exactly the same way.

Accordingly, this significantly reduces the probability that its light is blocked by some periodic object inside the solar system or a star or some other celestial body located on the path between the Sun and KIC 8462852. Now scientists are watching the tarnishing of neighboring stars in order to exclude this opportunity.

An interesting coincidence, according to Boyadzhian, is that the hypothetical planet of this star, the year in which it lasted 750-780 days, then it would be almost in the center of the “zone of life”. This, as the astronomer emphasizes, is nothing more than an accident and does not say that there is a Dyson sphere or some other man-made structure in the orbit of this planet.

On the other hand, such a periodicity of “flashing” KIC 8462852 suggests that it should be blocked by a giant object measuring about five Jupiters. As explained David Kipping (David Kipping), a famous planetologist from the University of Columbia, such a heavenly body can not be a planet – about such dimensions have red dwarfs and other small stars.

His tracks would be noticeable for the orbiting telescope “Spitzer”, operating in the infrared range, but Boyadzhian and her colleagues did not record them for about a year of observations. Moreover, these observations exclude the possibility of having a large number of asteroids and comets at such a distance from the star. All this once again made this star, as Bojadjian notes, even more mysterious than we thought before.

“We conducted observations in different parts of the spectrum, many of which were unavailable to Kepler during the first drops in the brightness of the star, comparing them with each other, we hope to understand what this object consists of, how” transparent “it is and how it arose. It is important that we conducted and conduct observations in real time, which can not be done with Kepler, “continues the astronomer.

The rings and retinue of “Saturn”

The answer to this riddle, according to Fernando Ballesteros from the University of Valencia (Spain) and his colleagues, may not be hiding in the planet or its potential debris, but in another type of objects well known to us – the giant gas-dust rings of the giant planets .

They drew attention to the fact that the tarnishing of KIC 8462852 did not occur randomly, but went in a peculiar “threes” – at first the brightness of the star fell relatively weakly for short periods of time, then it faded strongly, and then again dimmed faintly. All this reminded them of what the Sun would look like if we were looking at a position beyond the orbit of Saturn, the main “lord of the rings” in the solar system. 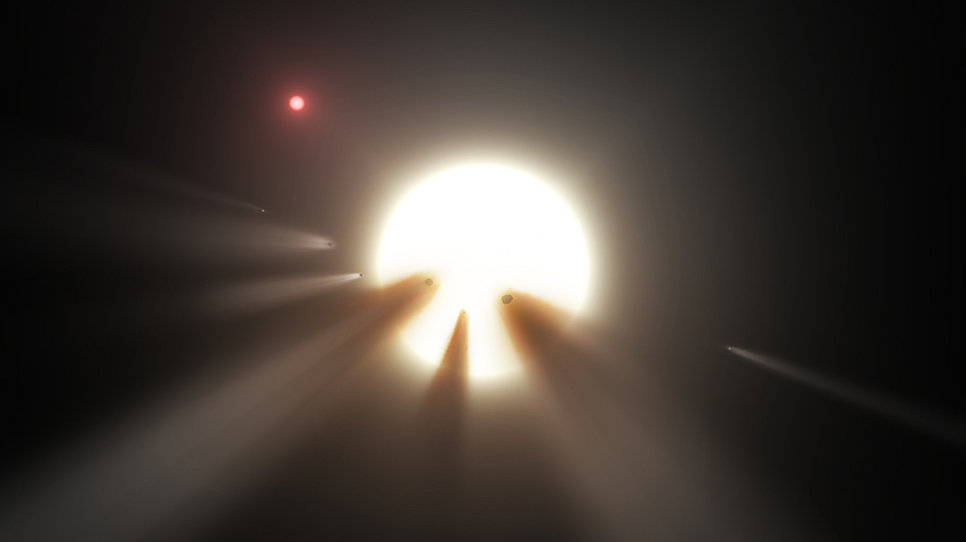 If KIC 8462852 has a similar planet, then its rings can reflect a sufficiently large amount of its light if they are rotated at an angle relative to observers in orbit or on the surface of the Earth. In this case, the passage of such a “Saturn” on the disk KIC 8462852 or behind it will significantly reduce the brightness of the luminary.

Small drops in the brightness of “alien stars”, in turn, will be caused by so-called Trojan asteroids, thousands of which move in orbit around the giant planets at a fixed distance behind them and in front of them.

Despite the elegance of this theory, not all astronomers agree with it. For example, planetologist Jason Wright of the University of Pennsylvania (USA) notes that both the “swarm” of Trojans and the rings of the planet must be gigantic. The width of the latter, according to his calculations, should be comparable with the distance between the Sun and the Earth to reflect a sufficient amount of light KIC 8462852, and the total mass of asteroids should be equal to or greater than the mass of Jupiter.

A similar position is held by Kipping – he noted that such a “planet” would not yield to large brown dwarfs in size, and therefore it will be visible in the infrared part of the spectrum. Therefore, this theory can hardly explain the mysterious obscurations of “alien stars.

Other riddles of KIC 8462852, such as its gradual tarnishing, are still a mystery to astronomers. As noted by Boyadzhian, today there is no doubt that they exist, but the new data not only does not explain them, but make them more incomprehensible and confusing. As she hopes, further observations will help us to uncover the secrets of the most mysterious star of our Galaxy.