Lakes and seas on Titan were incredibly calm 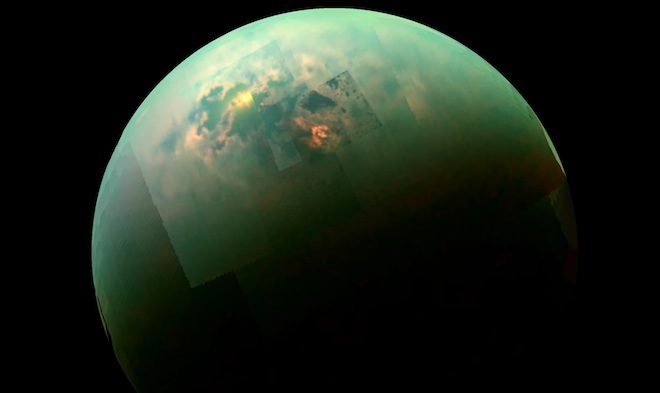 Lakes and seas from liquid hydrocarbons on Titan are incredibly calm, a new study says. And this means that the furious winds will not interfere with the landing of future missions on the huge moon of Saturn.

Waves that cover the ripples of the three largest lakes in the northern hemisphere of Titan are tiny, only 1 centimeter high and 20 centimeters long. The study showed that since the waves here are not very high, strong winds are most likely not observed.

The diameter of Titan is 5.15 thousand km. This is the only celestial body besides the Earth, on the surface of which there are permanent liquid ponds. But this liquid is not water. The Titan weather system is based on a hydrocarbon; Ethane and methane are pouring from the sky, getting into rivers and going to huge lakes and seas.

Some scientists believe that these lakes and seas can support life. But any organisms floating on the surface of Titan will undoubtedly differ from water-dependent life forms on Earth.

In a new study, the researchers analyzed the data that the NASA’s Cassini spacecraft, which has been orbiting Saturn since July 2004, has been extracted. The team conducted radar measurements of the Sea of ​​Kraken, the Sea of ​​Ligeia and the Punga Sea in the early summer on Titan. Then the researchers calculated the size of the waves.

Early summer on Titan was considered the beginning of the local season of winds. But a new study suggests that this is not true, and the winds at this time are very calm.

The surface of Titan was visited once – the landing module “Huygens”, which separated from “Cassini” in January 2005. There is no plan to land another probe on a huge moon, but various research groups are working on the development of ships and submarines that could study the seas of Titan.