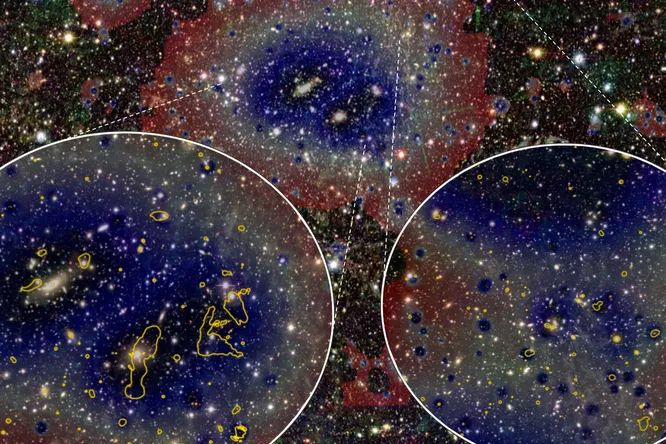 Astrophysicists have been able to observe a record long filament of baryonic matter between neighboring galaxies. It spans 50 million light years across. The study will help to better understand the evolution of the universe.

The new filament of rarefied hot gas, connecting galaxies, turned out to be a record long – as much as 50 million light years. Its discovery confirms the accepted models of the evolution of the Universe.

Earlier, researchers showed that baryonic matter – familiar to us – is lacking in the Universe. Scientists recently discovered where she might be hiding. These places turned out to be gas “bridges”, similar to filaments, which stretch for thousands and millions of light years between neighboring galaxies. These bridges consist of a very hot and rarefied gas.

According to calculations, such filaments contain more than half of all baryonic matter in the Universe. And now scientists have managed to find the largest such structure. Its length turned out to be equal to 50 million light years. It was extremely difficult to fix such a thread due to the strong rarefaction of the gas it consists of. This was done using the eROSITA telescope, which obtained images of the filament in the X-ray wavelength range.

In their work, astronomers studied the object Abell 3391/95, which consists of three galaxy clusters and is located about 700 million light years away. The eROSITA images show not only clusters and numerous individual galaxies, but also gas filaments connecting these structures. The largest of them was 50 million light years long. But it can be even more enormous: scientists assume that only a portion of this structure is depicted in the pictures.

The structure found by the researchers confirms the current model of the evolution of the Universe. Further study of these filaments will allow scientists to better understand the structure of galaxy clusters and refine theories describing the development of the universe.