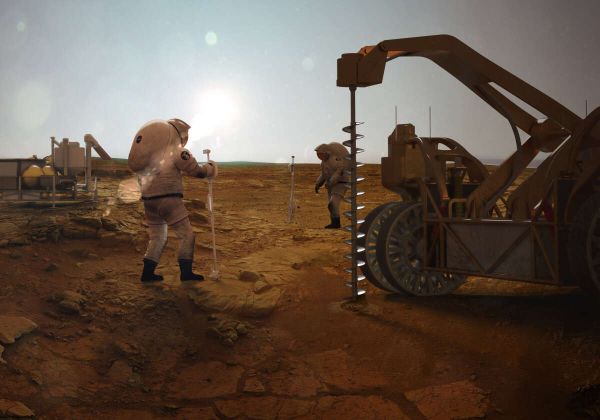 In a new study, scientists are finding that extraterrestrial life can be found near Earth – on the Moon or Mars, which were previously thought to be lifeless. The basic idea is that the search for life should not be on the very surface, but a little deeper.

Usually, when looking for life on other planets, astronomers first of all turn their attention to the presence of water on the surface and in the atmosphere. However, in a new work, researchers led by Dr. Manasvi Lingam, assistant professor of astrobiology at the Florida Institute of Technology, USA, examined the possibility of life in water bodies located deep below the surface of rocky space objects.

“We have studied the possibility of conditions conducive to the formation and development of life deep below the surface of rocky planets and satellites such as Mars and the Moon. In addition, we have outlined a possible strategy for finding traces of these life forms, ”Lingam said. “We know that this search will be technically difficult, but possible.”

To maintain water on the surface of the planet in liquid form, it is necessary that the pressure of the atmosphere be large enough, otherwise the water will quickly escape into space. However, in the case of subsurface reservoirs, pressures are higher, and therefore such reservoirs can be found even on those planets that are unable to hold their atmosphere.

In the study, Lingam and his team analyzed the thickness of such subsurface regions for nearby rocky space objects. The team concluded that high pressures and elevated temperatures in such bodies of water make life possible. In addition, Lingam and his colleagues have established an upper limit on the mass of organisms that can survive in such subsurface water bodies. Analysis has shown that the mass of this biomaterial can reach several percent of the mass of the subsurface part of the Earth’s biosphere or tenths of a percent of the total biomass of our planet.

On the issue of searching for traces of such deep life, the authors note that these searches will be associated with significant technical difficulties due to the great depth of occurrence of hypothetical reservoirs. One of the search options involves drilling rocks on the surface of a rocky object in the vicinity of the equator, where hypothetical deep life is located closer to the surface, the authors explained.

The work was published in the Astrophysical Journal.