Life on Mars: research and evidence 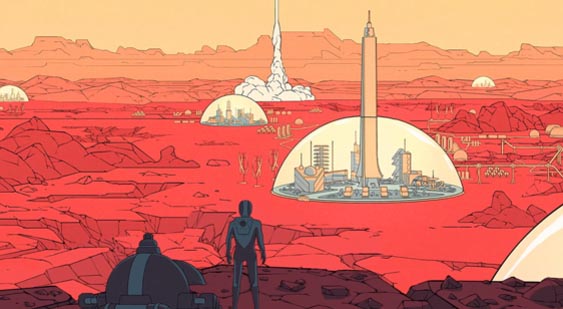 When they talk about places where extraterrestrial life could potentially exist, few objects so strongly inflame imagination as one of the nearest neighbors of the Earth. For centuries, people have looked at Mars and considered it a home for other beings. Over the past 50 years, various missions on the Red Planet have attempted to determine the possibility of such an evolution. But how likely is life on Mars?

Today the planet is dry and deserted, most of the water is hidden on polar ice caps. The subtle atmosphere of the planet allows the solar radiation to irradiate the surface, which adds tests for possible life. Evidence of the existence of water appeared in 2000, when photographs of the station “Mars Global Surveyor” showed ditches, which, apparently, formed due to running water.

According to one estimate, the ancient ocean covered 19% of the planet’s surface. Perhaps liquid water is still flowing through Mars either on the surface or under it. Most of the disputes are focused on repeating lines on slopes that could form water currents or quicksand.

Water below the surface can be even more livable. Underground water protects possible life forms from severe radiation. There is evidence of ice deposits the size of Lake Superior.

Over the past 4 billion years, the Earth was visited by many “newcomers” from Mars. Our planet was bombarded with stones that were blown from the surface of the Red Planet. Of the 34 Martian meteorites, three contain probable evidence of the existence of life on Mars.

The meteorite that was found in Antarctica became a sensation in 1996, when scientists stated that it could contain evidence of traces of life on Mars. Known as ALH 84001, the Martian cobblestone contained formations similar to the fossilized remains of bacterial life forms. However, these organic molecules were formed not because of biology, but because of volcanism.

Despite its geological origin, the organic nature of molecules is a positive moment in the hunt for life.

Scientists also found structures resembling fossilized nanobacteria in the meteorite of Nahla, a cobblestone from Mars, which fell in Egypt. The researchers determined that three quarters of the organic matter in the meteorite could not have been due to contamination by organic matter on Earth. However, further study of the spherical structure called ovoid, showed that it was most likely formed in the course of processes different from the life-forming ones.

The third meteorite, Shergotti, contains elements that suggest the presence of biofilm residues and microbial populations.

But a fresh examination of the surface will help to understand the evolution of life on Mars even better. Apparatus found evidence of the presence of water under the Martian crust, hot springs that are considered to be an excellent medium for the development of life, and irregular sporadic precipitation. Although the rover “Curiosity” is not a mission to find life, there are hopes that it will be able to point out the places that the first settlers will study and analyze.

Maybe we are Martians?

Transportation of material from Mars to Earth and, presumably, back caused a debate about the possibility of entering the planet life. The point of controversy was whether the tiny organisms were sufficiently stable to survive the journey through a cold, airless, vacuum-laden vacuum and bring life to their new home.

The idea of ​​such “sowing” is not limited to interaction with Mars. Some suggested that the cobblestones from the outer solar system bring life to Earth.

“If we find life on another planet, will it really be different or will it be connected with us?” And if so, did it spawn us, or did we breed it? – asks researcher Dina Pasini from Kent University (Great Britain). “We can not answer these questions right now, but they are not as implausible as one might imagine.”