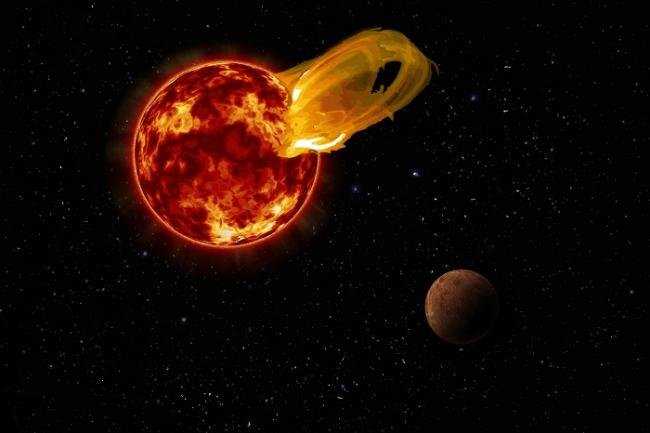 A group of astronomers recorded a strong outbreak of activity on the Centaurus Proxima, the closest star to the Sun, which occurred in March last year. Such outbreaks call into question the possibility of the existence of life on the planet closest to us outside the solar system.

A repeated analysis of the data obtained last year with the help of the radio telescope ALMA, conducted by a group of scientists led by astrophysicists from the Carnegie Institute, found a bright flash in March of last year on Proxima Centauri, a red dwarf and the closest star to the Earth (after the Sun). At the peak of luminosity, the radiation intensity of our nearest stellar neighbor was 10 times higher than the brightest of the solar flares ever observed in the same range. In just ten seconds the brightness of the star increased a thousand times. A larger outbreak was preceded by another, weaker; together they lasted less than two minutes.

Star flashes occur when the vibrations of the energy of the magnetic field of a star accelerate electrons to velocities close to the speed of light. The electrons accelerated by the magnetic field interact with other charged plasma particles, which make up the bulk of the star’s matter; this interaction leads to emissions of matter from the surface of the star, accompanied by intense radiation in all ranges of the electromagnetic spectrum.

“It is very likely that Proxima B, an exoplanet that rotates around Centaurus Proxima, received a huge dose of radiation during the outbreak,” McGregor explains, adding that scientists had previously known that the planet periodically reaches the X-ray of its star, albeit lesser intensity. Over the several billion years that have passed since the formation of Proxima b, outbreaks like March 2017 could completely deprive the planet of the atmosphere, liquid water and destroy any life if it had originated on the planet, the authors of the new work believe. However, scientists have previously questioned the possibility of life near red dwarfs, in particular, because the stars of this type do not give enough for the birth of life of the amount of ultraviolet.

Since the discovery in August 2016, Proxima b is of great interest to astronomers and planetologists, primarily because it is in the so-called habitat zone of its star. They share only 7.3 million kilometers (compared to 149.5 million km from the Earth to the Sun), but the red dwarf Proxima Centauri is much colder than our star, so even at such a relatively small distance on the exoplanet, it is estimated that there may be liquid water – an indispensable condition for the birth of life in a form known to us.

In November of this year, scientists based on the same data from the ALMA telescope concluded that there is a disk of dust and gas around Proxima Centauri, similar to the Kuiper belt in the solar system, minus its large objects. Then the average brightness of the star for several months of observation (with allowance for the flare) was explained by the scattering of radiation by gas molecules and dust particles of the ring; At the same time, scientists assumed that in addition to the Proxima exoplanet b, one or more dense stony bodies rotate around the star. But McGregor and her colleagues note that if we consider not the average luminosity of a star, but its dynamics, we can observe a bright flash and abandon the assumption of a gas-dust ring and other planets or asteroids around the Centaurus Proxima.