Like wind, ice and water created the Martian surface.

The photographs that hit the network depict a Martian terrain called the Neelee furrow — a collection of moats that run along the boundaries of tectonic faults. This area is a kind of boundary between two clearly different Martian hemispheres and emphasizes the phenomenon of “hemispheric dichotomy”.

The northern regions of the Red Planet are relatively smooth, and there are very few craters on them. And the opposite hemisphere has a very uneven relief and a lot of volcanic and meteorite craters. Furrow Neely distinguishes these two unlike parts of Mars.

Experts of the European Space Agency believe that the formation of such a border between the hemispheres was caused by the movement of powerful streams of water over the surface of the planet. In addition, the appearance of the Nili furrow was also strongly influenced by air currents and ice. 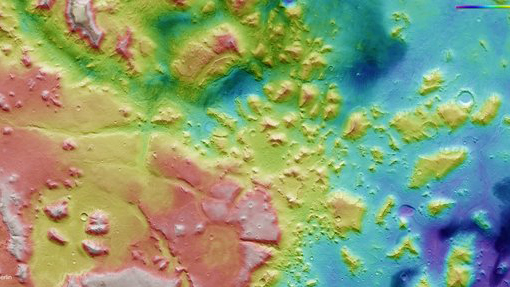