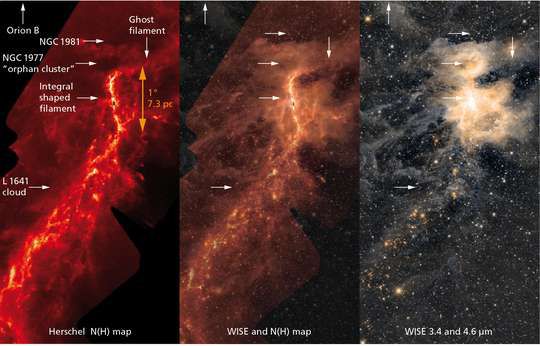 In space, there is always the formation of new stars. Whole clusters of stars are often able to form in a relatively short period of time. In the new study, Stutz Amelia and Andrew Gould of the Institute of astronomy of max Planck in Heidelberg proposed a mechanism that can explain such a rapid formation of star clusters. The researchers studied the band of gas and dust, including the famous nebula of Orion.

30 million years is “the blink of an eye in astronomical scale, so the formation of large groups of stars within such a short time requires a theoretical explanation. The main proposals made by scientists today are the scripts “chain reactions” when the first stars formed accelerate the formation of subsequent stars, or participate in the formation of stars supernova, creating a shock wave that compresses matter and molecular clouds leading to the formation of nuclei of new stars.

Amelia, Stutz and Andrew Gould propose a different mechanism of star formation, in which the key factor in the formation of new stars is the interaction between gravitational and magnetic fields. To test his hypothesis, they studied the structure in the form of a strip, which includes the Orion nebula, located at a distance of 1300 light years from us.

According to previous studies about magnetic fields and gravity have on the substance of this band, approximately the same effect. According to the model proposed by Schutz and Gould, this band is a structure performing vibrations in space.

The main confirmation of its script, the authors see that revealed in the course of the observations the fact that the protostar are concentrated in the test strip within dense regions, and young stars within the less dense regions of space. According to the authors this is due to the fact that diffuse, large protostar entice densely filled with substance “sleeves” fluctuating structure of the investigated strips, while the more dense, compact young stars remain in place, occupying a less crowded region of space.

The study presented in the journal Astronomy & Astrophysics.