Mars approached the Earth at a record close distance 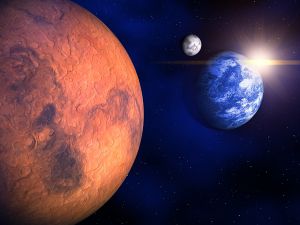 Scientists from NOVIK (National office for Aeronautics and space research) made a shocking statement. Between the planets Mars and Earth, recorded the smallest distance, which is a record.

But even through this astronomical phenomenon, the inhabitants of the Earth will not be able so easily to see the Red planet in the sky, as it happens with the Moon. Anyway, will have to use telescopes.

Convergence at a record close distance took place on 22 may. Moreover, Mars will be close enough to the third planet in a few weeks. As for the distance, record figures were recorded at the level at 56.4 million kilometers.

But the news would not be such if not for the fact that such phenomena on the convergence of these planets are very rare. On average, about once in 10-15 years. And due to the fact that such a moment occurred in the current year, the following can be expected very soon.

Recall that Mars is the fourth planet from the Sun and has a planet and the changing of the seasons and period of rotation that are fully consistent with those present at the Ground. The only difference in the cold and very dry climate.