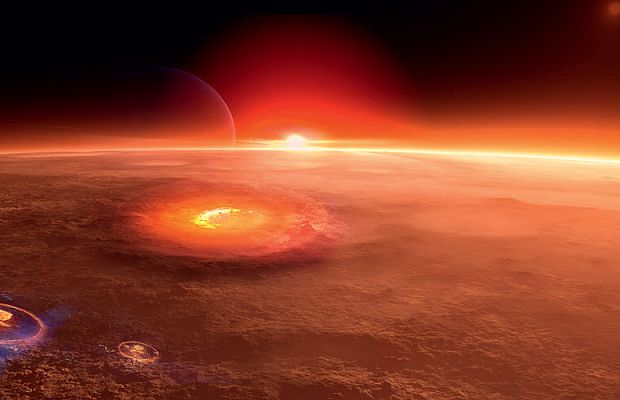 If there will come a day when Earth will suffer irreparable harm and we have to move to another planet, then the best candidate at the moment (at least within the Solar system) is Mars. But before to move there, we most likely will have to terraform this planet. But how do we do that? No joke: one of the proposed options is the bombing of the poles of the red planet’s nuclear warheads. The explosions will melt billions of tons contained in the poles of the planet’s frozen carbon dioxide and will start the process of the greenhouse effect.

And yet to move in the interplanetary Chernobyl is optional. There are more humane and safe way to heat Mars to a livable temperature — artificial oblakovshtanah.

Mars is now a frozen desert, but in the past this planet was much warmer. Exactly how the Red planet can maintain earth-like climate 3.8 billion years ago, for scientists still remains a mystery, but it is known that ancient Mars had received 35 percent less sunlight compared to the current Mars. This, in turn, is only 1/3 of the amount of sunlight that can enjoy the current Earth. Nevertheless, even in this case the Red planet somehow could keep the temperature above freezing level.

According to published in the scientific journal Icarus, the results of computer models, to maintain the temperature in the ancient planet helped high-altitude clouds. If these models are correct, then we have a chance sometime in the future to make Mars habitable again.

“I think most agree on one thing: the volume of carbon dioxide and water vapour would not be enough to warm Mars to the point of ice melting,” says the study’s lead author Ramses Ramirez.

“For the right temperature and ability to support water in liquid form on the surface in the planet’s atmosphere had to contain other gases or clouds. Maybe both of these factors at once.”

While most scholars believe that the air of Mars 3.8 billion years ago, could contain carbon dioxide gas and particles of water vapor, there is the view that in the atmosphere could also contain other gases, including sulfur dioxide, methane and hydrogen, which are also carried importance for the climate of the planet. However, models constructed only with regard to greenhouse gases, are unable to explain the stability of the warm climate of Mars over time. Therefore, a growing number of astrobiologists have put forward alternative hypotheses and explanations for this puzzle. One such explanation is connected with clouds.

“Clouds absorb and reflect solar radiation. Depending on their chemical properties and location in the atmosphere, clouds can help retain heat on the planet, and to reduce the temperature on its surface,” says Ramirez.

On Earth low-altitude clouds rather help to scatter solar radiation back to space than they absorb heat from the surface, creating a cooling effect. Most often, high-altitude clouds are heated downstream and up to 10 degrees Celsius.

In 2013, with the support of aerospace agencies and NASA using three-dimensional climate models, a study was conducted to determine the possibility of the presence of the high-altitude water clouds in the past. The obtained results are promising. If in the past on Mars in places the ice accumulations falling of large asteroids, melting the ice and turning it into steam, then this steam should be enough to maintain warm earth’s climate and water in liquid form. However, the model unfortunately could not show the exact amount of clouds was required to maintain warm climate.

Since then, the Ramirez and continued to explore. Using a simplified climate model that allows to manually configure such indicators as density of clouds and the size of the ice particles, Ramirez and his colleague James Kasting found that a single layer of Cirrus clouds from a 75% coverage of the planet would be more than enough to maintain a warm climate.

It should be noted that this volume of clouds is very large. For comparison, about 50 percent of our planet’s surface at any moment covered by clouds and only half of this is accounted for by high-altitude clouds. Ramirez, however, believes that we cannot exclude the possibility that the Red planet was covered in beautiful clouds, trapping heat at its surface.

“Now the presence of Cirrus clouds Mars seems unreal, but in the past the planet can really have. The question, of course, not been resolved, discussions are ongoing, but so far everything says this benefit,” says Ramirez.

Actually, the answer to this question will be extremely difficult. Can help a more detailed geological analyses of the Martian surface. If the scientists will get a piece of Martian rock age of about 4 billion years, to solve the mystery of the ancient Martian atmosphere, and possibly even of ancient life will be much easier.

Of course, for those who have to live on Mars, much more important than the future of the climate of Mars than his past. Can artificial oblakovshtanah be our best strategy of terraforming this planet? This question was addressed to Chris McKay, a NASA astrobiology research center the estate of Ames working in the area of terraforming Mars since the 1990-ies.

“A very interesting proposal with very useful consequences for the planet in case of successful implementation,” says McKay.

Astrobiologist from NASA notes that the proposed Ramirez an explanation of how ancient Mars could “naturally” to the cloud could be a starting point in addressing the issue of oblakovshtanah Mars of the future, but through the use of modern technology.

Options clouds can be very specific, but we can control the process of their formation, which in the case of the earlier Mars was, of course, is impossible,” adds the scientist.

In any case, to create a sufficiently dense atmosphere of Mars will require a lot of water. And, perhaps, the best solution to get it will be the nuclear bombing of the planet poles. However, with proper management cloud coverage of the planet we might not need too active to throw our future house nuclear warheads.

To begin the process of releasing greenhouse gases at the poles of the planet may have to use nuclear bombs, which in turn will certainly increase the overall radiation background. However, the necessary amount of coverage can provide and Cirrus clouds. In this case, do not have to use a lot of charges”.