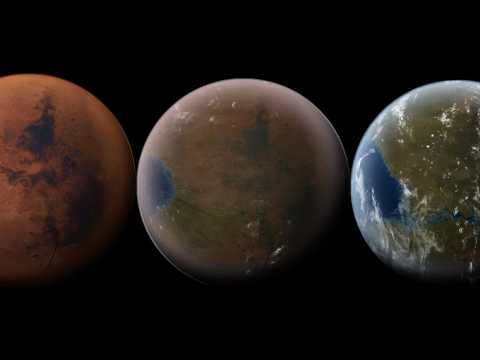 Artificial magnetosphere between the Sun and Mars will allow the red planet to restore a suitable living climate.

Cold and bare, dusty desert, covered with a weak atmosphere – today, Mars looks quite bleak and unsuitable for life. First, however, here the atmosphere was dense enough, was preserved and extensive supplies of water, and a comfortable temperature. A key reason for the sad changes which had occurred with the red planet, according to its modest size. The surface of Mars quickly cooled down and stiffened, ceasing to create a global magnetic field. The protection was gone, and the stream of particles of the solar wind was free to enter the atmosphere, a little “blow-off” its 85-90% in space. Followed by evaporated water, and Mars became what we see it today.

There are many ideas about how we could return the next planet suitable for life look up to the bombing of Mars thermonuclear warheads. At a recent Symposium on Planetary Science Vision 2050 Director of the planetary science division of NASA, Jim green (Jim Green) sounded more peaceful project, a key part of which should be a new artificial magnetosphere. “It will weaken a